Home » World » Georgia : Cops Nab Electric Leaf Owner Before He Can Ride Free On Your Nickel 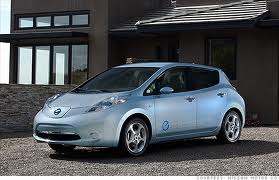 Georgia : Cops Nab Electric Leaf Owner Before He Can Ride Free On Your Nickel

There’s no such thing as a free lunch, or free electricity. That’s the lesson Kaveh Kamooneh, the owner of a Nissan Leaf electric car, is learning after spending 15 hours in jail for plugging his car into a public school’s outlet without asking.

Kamooneh was picking his son up from tennis practice at Chamblee Middle School in Chamblee, Ga., when he plugged his Nissan Leaf into a 110-volt external outlet and let it charge “for about 20 minutes,” he says. A little more than a week later, cops showed up and arrested Kamooneh, charging him with stealing from the county.

“I’m not sure how much electricity he stole,” Sgt. Ernesto Ford of the Chamblee PD said tuesday. “We couldn’t determine the amount. But it was less than a hundred bucks.”

Authorities jailed Kahmooneh on a charge of theft by taking. Kahmooneh says he routinely plugs his car into publicly accessible outlets.

‘I took the electricity without permission,” Kamooneh said. “Normally the value is so little you don’t typically ask permission in these cases”

“To me this was a little heavy handed,” said Greg Crittenden, who sells electric vehicle chargers and is active in the Electric Vehicle Club of the South. He suggests that police and Kamooneh both mishandled the incident.

“I would like to see electric vehicle owners ask for permission,” Crittenden said, though he says he’s never heard of an arrest in such a case until this one.

A spokeswoman for the DeKalb solicitor’s office said a decision hasn’t been made whether to prosecute the case.

Web articles – via partners/network co-ordinators. This website and its contents are the exclusive property of ANGA Media Corporation . We appreciate your feedback and respond to every request. Please fill in the form or send us email to: [email protected]
Previous: Lil kim new song Will Feature Miley Cyrus: Morning Mix
Next: Fast & Furious crew in tribute to Paul Walker (VIDEO)