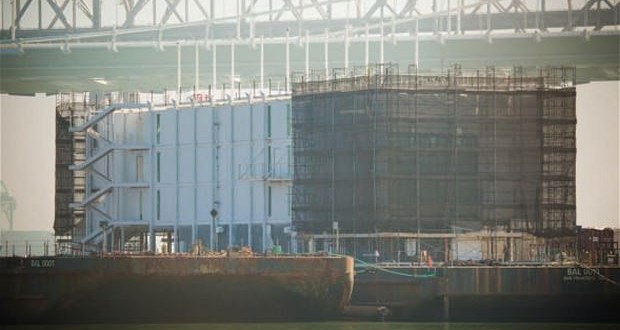 You may remember hearing about the Google barge project. Last year, Google anchored barges in Portland, Maine and San Francisco, California. It was rumored that it would be a moving showroom for Google’s products or as a classroom-like experience to teach consumers about Google’s technology.

But nine months later, the outlook on Google’s barges isn’t looking too bright. The Portland Press Herald reported Thursday that the search giant had sold the unfinished barge project it had there, and that its materials would be scrapped.

The growing firm, which has a rapidly growing outpost in Cambridge, had big plans to use the massive flotillas as showrooms for Google Glass and cool tech created by its experimental Google X branch. First, they would be open to Valley and tech VIPs and, in time, the public. Planning documents showed that the barges would have large fish fin-like sails and be four stories tall.

The company got into a bit of a patent mix up around the purpose of the barges, too, which is thought to have slowed down the process of the barges, which Google was planning on launching in November.

It would be tough for the showrooms to come to port in Boston, for example. “Any type of floating vessel or barge floating close to the Harbor would have to get approval from a number of entities,” explained Vivien Li of the Boston Harbor Association, “including the Boston Harbor Master, the City of Boston Redevelopment Authority and potentially the U.S. Coast Guard.”

The barges were also thought to be Google’s bid to create its own bigger version of an Apple Store. As of September 2013, its product competitor had a global retail network of 416 stores. Imitation is the best form of flattery, and Google might have wanted to try and catch up.

Though the barge effort failed, Google fortunately has the bank account to stay afloat. The company spent at least $35 million on the California barge, and about $40 million on the Portland barge, the Press Herald said. In other words, mere pocket change to the innovative tech behemoth.

Web articles – via partners/network co-ordinators. This website and its contents are the exclusive property of ANGA Media Corporation . We appreciate your feedback and respond to every request. Please fill in the form or send us email to: [email protected]
Previous: Researchers create see-through mouse and rat bodies
Next: Santa Ana teen sets self ablaze in ‘fire challenge’