Home » World » How the greatest dead rock gods would look today : Elvis at 78, Bob Marley at 68 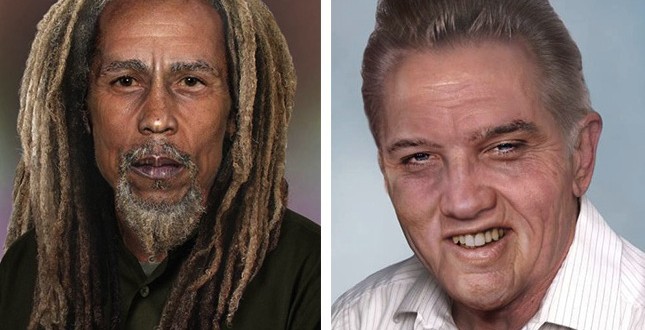 How the greatest dead rock gods would look today

How the greatest dead rock gods would look today : Elvis at 78, Bob Marley at 68

The Sachs Media Group have teamed up with photo restoration and manipulation company Phojoe to create speculative portraits of what rock and roll’s greatest musicians might look like if they were still alive today. The gallery, which is described as “a heartfelt tribute to the memory of beloved artists who helped shape generations of music fans, in order to keep their memory alive for future generations” features wrinkled and grey versions of Kurt Cobain, Jim Morrison, John Lennon, Keith Moon, Janis Joplin, Jimi Hendrix, Elvis Presley, and Bob Marley.

Titled ‘Rock & Roll Heaven,’ the image collection is currently available to view as a gallery or slideshow, with commentary from musicologists who predict what each picture’s subject would have done over the past several decades. For instance, regarding Lennon, the site muses, “Given what he had done already, it is hard to put limits on what he might have attempted, and it seems safe to assume he would have continued to surprise even his most devoted followers”; on Morrison, they imagine that “he might have abandoned music entirely, devoted himself to writing, moved to New York, Paris, Tokyo or Dakar, and by now be honored by a few cognoscenti as an experimental avant-gardist rather than revered by millions as a rock star.”

For Sachs CEO Ron Sachs, the project works as an act of tribute. “Through this series of images, we hope to honor them and evoke some of the magic they brought to millions of their fans,” he explained in a statement. “Even as we ponder what wonderful new contributions they still could have made.”

Web articles – via partners/network co-ordinators. This website and its contents are the exclusive property of ANGA Media Corporation . We appreciate your feedback and respond to every request. Please fill in the form or send us email to: [email protected]
Previous: ‪James Cameron’s Planetary Resources Hopes to ‬mining‪ Asteroids for Precious Metals‬
Next: Howie Mandel Gets A Deal On His Malibu Home for $7 million