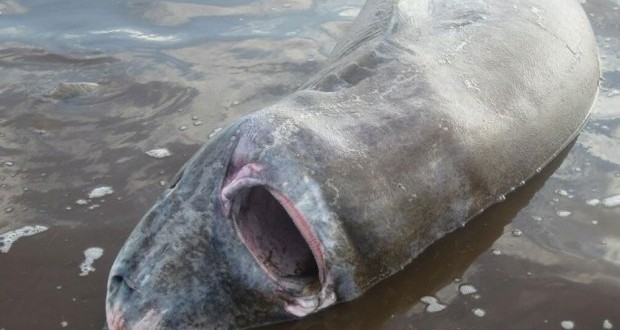 Ball discovered the shark, which the men think from their own research is a Greenland shark. Chaulk went to see what he thought was a beached whale from a distance, but realized it was a shark upon closer inspection.

The mystery still remains, though, of how exactly the shark came into possession of the moose parts. According to Chaulk, people clean and gut moose near where he found the shark, often throwing the scraps and entrails into the harbor. The shark, he surmised, must have simply come across some irresistible morsels and literally choked on his own greed.

However, Jeffrey Gallant, of the Greenland Shark and Elasmobranch Education and Research Group, believes that although Chaulk and Ball did the right thing by getting the shark back in the water, they would have been better served leaving the moose chunk in its mouth. “When you’re man-handling a shark like this and trying to get it back in the water,” he told CBC News, “the fact that its mouth was otherwise pre-occupied by chewing on the meat, you reduce the risk yourself of getting bit accidentally.”

Safety seemed to be the last thing on Chaulk’s mind, though, as he watched the shark head back out to sea. “It was a good feeling to see that shark swim out,” he said. “Knowing that you saved his life.”

Web articles – via partners/network co-ordinators. This website and its contents are the exclusive property of ANGA Media Corporation . We appreciate your feedback and respond to every request. Please fill in the form or send us email to: [email protected]
Previous: Senate scandal : PMO says Nigel Wright memo misled Harper
Next: Pinterest San Francisco headquarters for sale