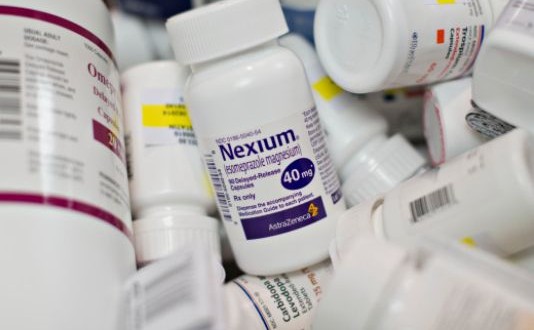 A popular group of heartburn drugs may be linked to dementia in seniors.

People who regularly took proton-pump inhibitors, which includes drugs such as Nexium, Prilosec and Prevacid, were 44 percent more likely to develop dementia compared with people who didn’t, according to the study, which used survey data of more than 73,000 people 75 years or older.

“This is a very important issue given the very high prevalence of pharmacological drugs’ long-term use in elderly populations that have a very high risk of dementia,” the University of Pittsburgh’s Lewis Kuller said in an editorial that accompanied the study.

About 15 million people in the United States take PPIs, which can be obtained by prescription or over the counter, according to NPR. The drugs work by reducing the production of stomach acid, which can lead to side effects such as nausea or abdominal pain. Long-term use can cause fragile bones, according to MedicineNet.

The study, published Monday in the journal JAMA Neurology, found that PPIs could cause dementia, too.

German researchers used data from one of Germany’s leading insurance companies for the study. They looked at 73,679 people over the age of 74, and the ones who regularly took prescription PPIs had a 44-percent increased risk of dementia compared to those who didn’t.

Because the study used survey data, it is considered only an association study. Further research would be needed to discover a true cause-and-effect relationship.

“Prilosec OTC is an FDA-approved, safe and effective remedy to relieve frequent heartburn symptoms,” Mollie C. Wheeler, a spokesperson for Procter & Gamble, which manufactures Prilosec, said in an emailed statement to Patch.

“As with any OTC medication, however, it is important to read and follow all label directions to ensure proper dosing and to avoid drug interactions. If consumers have questions regarding the use of Prilosec OTC, we encourage them to talk with their doctor or pharmacist.”

A statement from The Consumer Healthcare Products Association noted that the study only looked at prescription PPIs and urged people to use caution when buying over-the-counter medication.

“With any OTC medication, consumers should read and follow the Drug Facts label closely to understand what each medicine is used for, to assure it is appropriate for use with their symptoms, to ensure appropriate dosing including duration of use, and to avoid drug interactions,” the statement said.

Web articles – via partners/network co-ordinators. This website and its contents are the exclusive property of ANGA Media Corporation . We appreciate your feedback and respond to every request. Please fill in the form or send us email to: [email protected]
Previous: Duck or Rabbit: Which animal do you see first in this optical illusion? “Photo”
Next: Taylor Swift: Singer Gets Congratulations From Calvin Harris After Grammy Wins