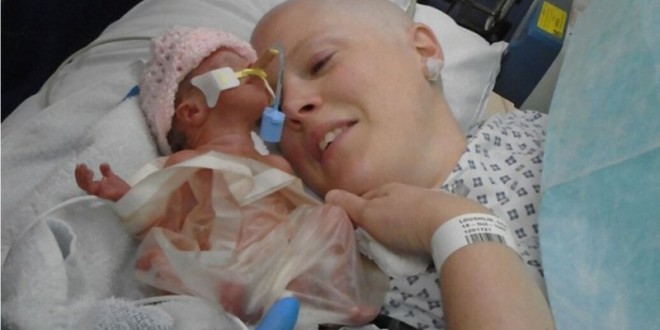 Heidi Loughlin: Baby Of Mum Who Delayed Chemo Has Died

Heidi Loughlin: Baby Of Mum Who Delayed Chemo Has Died

Heidi Loughlin, who gave birth 12 weeks early before starting course of herceptin, announces death of Ally Louise on her blog.

Heidi Loughlin was just three months pregnant when diagnosed with a rare and aggressive form of breast cancer.

Doctors recommended she should start a strong course of chemotherapy, which would have been harmful to her unborn child.

The 32-year-old, from Portishead, near Bristol, instead opted to go with a less effective treatment because it would not harm her baby.

But when the treatment was not working, she had no choice but to give birth 27 weeks into her pregnancy via c-section.

But on Sunday, she broke the devastating news that her daughter had died.

In a poem on her blog – Storm In A Tit Cup – she wrote: “Yesterday afternoon our hearts broke in two. For we had to say goodbye to you. Our love for you is a beautiful haze. Even though you lived for 8 short days.”

Heidi Loughlin, who also has sons Noah, two, and Tait, one, with partner Keith, first went to doctors in February after noticing a rash while breastfeeding her youngest.

Doctors said she had mastitis – a common condition for new mothers where breast tissue becomes painful and inflamed.

However, in September – weeks after discovering she was going to be a mother for the third time – tests revealed she had inflammatory breast cancer. It is a rare form of the disease with a typical prognosis of two to five years.

After deciding to have a less dangerous form of chemotherapy to give her baby the best chance of survival, a follow-up appointment revealed the treatment was not working and needed to be switched immediately to Herceptin.

Speaking about the difficult decision she faced, she wrote: “Babies and Herceptin don’t mix.

“This means the baby will be 12 weeks early. This is absolutely terrifying.

“Also, what is terrifying is that if I stay pregnant until new year’s eve as originally planned, then there’s a pretty good chance I’ve missed my window of potential cure.

“Realistically I’ve got to make a decision that encompasses everyone. I absolutely need to be here for my children.”

Web articles – via partners/network co-ordinators. This website and its contents are the exclusive property of ANGA Media Corporation . We appreciate your feedback and respond to every request. Please fill in the form or send us email to: [email protected]
Previous: Ontario to fund fertility treatments at five local clinics
Next: BMW fined $40 million for Mini Cooper safety violations, Report