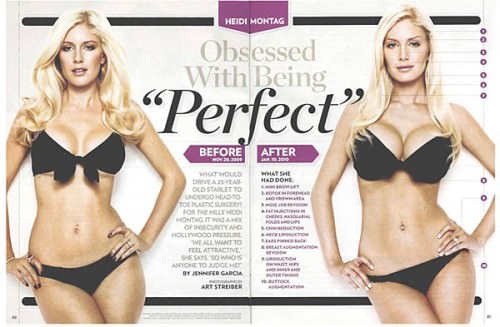 Heidi Montag has shared her regrets over having undergone several cosmetic surgeries and vowed to not put herself under the knife again in an interview with Extra.

Heidi Montag talks about getting her procedures done in 2009, and how she feels about them now. Montag even said during the interview, “I’m ‘surgery girl,’ that sucks.”

Heidi Montag revealed that at the time of the surgery, “I disliked myself so much. I literally chopped up my own body.” A few of the procedures Montag got done? Getting DDD implants, as well as getting her ears pinned back, a mini brow lift and a nose job revision.

Last year, Heidi Montag decided to get a breast reduction. Why? Montag revealed, “My implants were falling through. They were three pounds each so I was really miserable. Obviously, I didn’t want to go back into surgery, but it was really necessary.”

Montag’s biggest regret? She revealed, “Getting my chin reduced, because I have TMJ now and my jaw hurts. I don’t think people do tell you the trauma of what you’re going to heal from. I was in so much pain, I actually thought I was going to die.” Yikes! That sounds really scary!

It sounds like Montag is done with plastic surgery. She went on to say in the interview, “I’m just done with all of it. I’m going to age gracefully and bow out.”

Web articles – via partners/network co-ordinators. This website and its contents are the exclusive property of ANGA Media Corporation . We appreciate your feedback and respond to every request. Please fill in the form or send us email to: [email protected]
Previous: Sci-fi epic “Interstellar” Tops Japan Box Office
Next: Double Arm Transplant Recipient Thanks Surgeons (Video)