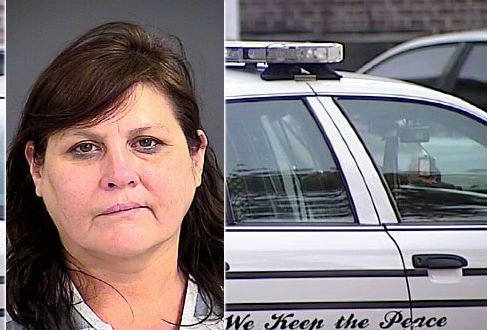 A 41-year-old man was left bloodied early Christmas morning after his spouse attacked and stabbed him with a ceramic squirrel for not bringing home beer, according to an incident report.

Helen Ann Williams, 44, was arrested Wednesday and charged with criminal domestic violence of a high and aggravated nature.

North Charleston police were called to a home in the 2000 block of Clifton Street around 12:20 a.m. for a domestic disturbance.

According to the Charleston County Sheriff’s office, deputies arrived at Williams’ North Charleston home Wednesday morning to find her husband covered in blood. Williams, in an attempt to cover her tracks, told police the man fell and cut himself. However, she couldn’t explain why her hands and clothing were also covered with blood. The victim was found with a substantial amount of blood on his face, Charleston’s NBC affiliate reported.

Williams went on to tell police her husband, from a common-law marriage, went to a store to purchase some beer, but — as it was Christmas Eve — was unable to buy any because stores were closed. The man returned home and began making a sandwich when Williams turned violent against her husband.

The woman allegedly took the ceramic squirrel and beat the man in the head, then proceeded to stab him in the shoulder and chest.

Williams was arrested and charged with criminal domestic violence. Bond was set at $10,000.

Web articles – via partners/network co-ordinators. This website and its contents are the exclusive property of ANGA Media Corporation . We appreciate your feedback and respond to every request. Please fill in the form or send us email to: [email protected]
Previous: Beyonce Dances with Sick Fan at Las Vegas Concert (VIDEO)
Next: Leonardo DiCaprio : Actor Sells Beachfront Malibu Home