Home » World » HoloFlex: Your Next Smartphone Might Be Flexible And Holographic (Video) 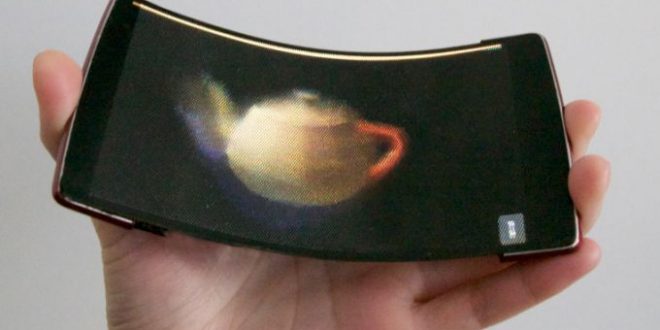 HoloFlex: Your Next Smartphone Might Be Flexible And Holographic

HoloFlex: Your Next Smartphone Might Be Flexible And Holographic (Video)

Microsoft may be working on a holographic computing platform that involves a big, expensive headset. But researchers at Queen’s University’s Human Media Lab have developed a headset-free system that works with a smartphone-sized device.

Scientists have developed the world’s first holographic flexible smartphone. The device, dubbed HoloFlex, is capable of rendering 3D images with motion parallax and stereoscopy to multiple simultaneous users without head tracking or glasses.

“HoloFlex offers a completely new way of interacting with your smartphone. It allows for glasses-free interactions with 3D video and images in a way that does not encumber the user.” says Dr. Vertegaal.

Building on the success of the ReFlex flexible smartphone, HoloFlex is also equipped with a bend sensor, which allows for the user to bend the phone as a means of moving objects along the z-axis of the display. HoloFlex is powered by a 1.5 GHz Qualcomm Snapdragon 810 processor and 2 GB of memory. The board runs Android 5.1 and includes an Adreno 430 GPU supporting OpenGL 3.1.

Dr. Vertegaal envisions a number of applications for the new functionality of the HoloFlex technology. A first application is the use of bend gestures for Z-Input to facilitate the editing of 3D models, for example, when 3D printing. Using the touchscreen, a user can swipe to manipulate objects in the x and y axes, while squeezing the display to move objects along the z-axis. Due to the wide view angle, multiple users can examine a 3D model simultaneously from different points of view.

“By employing a depth camera, users can also perform holographic video conferences with one another”, says Dr. Vertegaal. “When bending the display users literally pop out of the screen and can even look around each other, with their faces rendered correctly from any angle to any onlooker”.

HoloFlex also can be used for holographic gaming. In a game such as Angry Birds, for example, users would be able to bend the side of the display to pull the elastic rubber band that propels the bird. When the bird flies across the screen, the holographic display makes the bird literally pop out of the screen in the third dimension.

Web articles – via partners/network co-ordinators. This website and its contents are the exclusive property of ANGA Media Corporation . We appreciate your feedback and respond to every request. Please fill in the form or send us email to: [email protected]
Previous: Keswick man clocked at shocking 101 km over speed limit!
Next: Overweight mums have obese children, study says