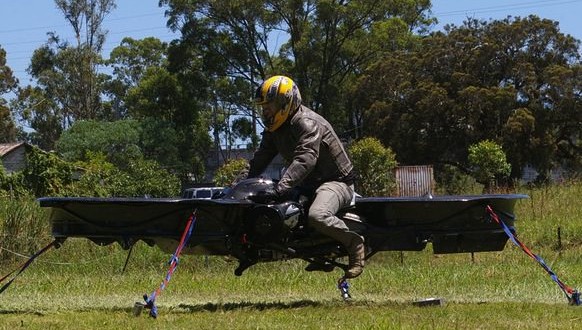 This Hoverbike Is Basically a Giant Quadcopter Drone

This Hoverbike Is Basically a Giant Quadcopter Drone (Video)

Hoverbikes aren’t yet ready for your daily commute, but in pushing to get closer to that point UK-based company Malloy Aeronautics has perhaps made the next-best thing: a drone version. Drone 3 is a functioning drone in its own right, but it’s also a 1/3-sized scale model of MA’s real, human-sized Hoverbike.

Essentially the bike is a quadrocopter, with two pairs of overlapping props at the front and the back resulting in a slim design and a platform stable enough to carry a glass of water without spilling.

The drone was built as a proof of concept for the full-scale design (which was originally bicopter with two props) which Malloy is currently finalising before they submit designs for a prototype to aviation authorities.

“It’s not just a recreational form of personal transport,” says the company about the craft. “Its low cost and practical size lends itself to search and rescue, precision farming and cattle mustering, first-responder emergency services and cargo insertion of up to 120kg (265lbs) into confined spaces.”

Technically the hoverbike is a helicopter, with Malloy adding that they beleive it would be “ideal for ski and mountain rescue, airborne logistics and time-sensitive personnel insertion/extraction during major disasters.”

While the hoverbike itself may be some way off making it to market, the scale model is impressive in itself. As well as being super stable it has a 30cm long platform capable of carrying 5kg and is seen delivering drinks and airlifting a teddy bear in the campaign video (above).

Web articles – via partners/network co-ordinators. This website and its contents are the exclusive property of ANGA Media Corporation . We appreciate your feedback and respond to every request. Please fill in the form or send us email to: [email protected]
Previous: Christiane Farazli : Dirty doc hit with some bitter medicine
Next: Dinosaurs all had feathers, New Study