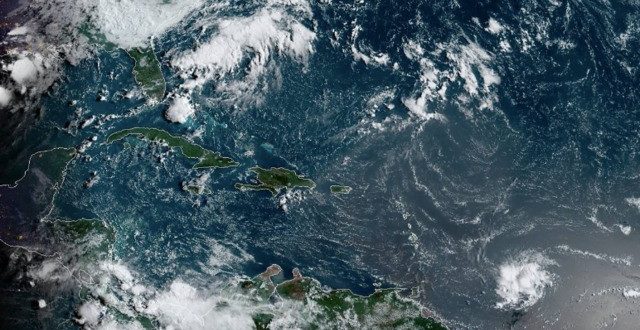 Tropical Storm Dorian could be hurricane when it approaches a Puerto Rico still in recovery.

As tropical storm Dorian threatens to become a hurricane, the National Oceanic and Atmospheric Administration (NOAA) released a statement regarding the use of nuclear weapons against massive storms. According to the agency, aside from being a ridiculous idea, nuking hurricanes also won’t work.

Currently, the tropic storm Dorian is gaining strength as it moves over the Atlantic. Experts fear that by the time it reaches Puerto Rico, it has already transformed into a powerful hurricane.

During moments of natural calamities, it is common for the U.S. government to receive suggestions offering possible solutions. One of the most common ones is the idea of detonating a nuclear bomb within a hurricane in order to dissipate it.

This suggestion relies on the idea that the powerful explosion from the nuclear weapon would scatter most of the warm air within the eye of the hurricane and replace it with colder or denser air. Theoretically, doing so would weaken the storm and reduce its wind speed.

Although it would seem like a viable idea, NOAA clarified that detonating a nuclear bomb within a hurricane will not work due to the immense amount of energy required to do so. The agency presented its explanation as part of its FAQs page on tropical cyclones.

According to the agency, the level of heat that a hurricane releases is equivalent to a 10-megaton nuclear bomb exploding every 20 minutes. In order to weaken a hurricane by dissipating the air inside it, it would require an explosion equivalent to 500 million tons for an eye that has a diameter of 25 miles.

“It’s difficult to envision a practical way of moving that much air around,” NOAA said in a statement.

Aside from this, NOAA warned about the high risk of radiation fallout after using a nuclear bomb against a hurricane. After the detonation, the trade winds from the hurricane will carry the radiation from the bomb over populated lands. In addition to harming humans, this will also have a great devastating effect on the environment.

The agency also stated that nuking weak tropical depressions before they become hurricanes is also a bad idea since there is currently no way of telling in advance which of them will transform into a massive storm.

Web articles – via partners/network co-ordinators. This website and its contents are the exclusive property of ANGA Media Corporation . We appreciate your feedback and respond to every request. Please fill in the form or send us email to: [email protected]
Previous: Child exploitation operations net 82 arrests, including 31 in Georgia
Next: Ynés Mexía: Google Doodle Honors tenacious Mexican-American and explorer