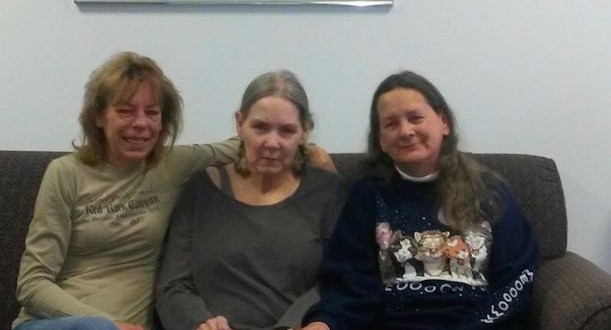 ISHPEMING – State police still are searching for two sisters from Nebraska and Oklahoma who have been missing for a week during a trip in Michigan.

It’s been a week since family members have heard from 52-year-old Leslie Roy of Valley and 56-year-old Lee Wright of South Depew, Okla.

Their last communication was a text sent at 8:22 p.m. April 10 from their hotel in the Ishpeming, Mich., area, said Sharri Missman, another sister who lives in Gretna. Earlier that evening, they ate dinner with a niece’s family.

Hotel staff told family the women checked out the next morning, and credit card records show they visited a convenience store, Missman said.

No credit card charges. No phone calls. No texts.

They didn’t check into their hotel in Mackinaw City, Mich., that night and never made it to visit an aunt and uncle in Kalamazoo, Mich., as planned.

Michigan State police have asked area residents to help find the women and said they received a report of a sighting on April 11 at a store near Tahquamenon State Park, a 50,000-acre wilderness, much of it without roads, buildings or power lines.

Roy and Wright were traveling in a 2010 White Ford Explorer with Nebraska plates possibly bearing the numbers TVC973 or TTM081.

The sisters decided to take the trip after their mom, Donna Hackman of Papillion, died in August, Missman said.

Both are single and have grown children and grandchildren. Wright’s husband died in November following a long illness.

Roy took time off her job at The Egg & I in Omaha, and the two headed off on a road trip, their first destination the home of their sister Roxanne Yost in Ishpeming.

Roy should have returned to Nebraska Friday, Missman said.

Instead, her loved ones are trying not to think about worst-case scenarios.

“We’re just like trying to put the pieces together,” she said.

Web articles – via partners/network co-ordinators. This website and its contents are the exclusive property of ANGA Media Corporation . We appreciate your feedback and respond to every request. Please fill in the form or send us email to: [email protected]
Previous: Recon Jet Hands-On: Smarter Glasses for Athletes (Video)
Next: Rare oarfish washed up on a beach in New Zealand (Photo)