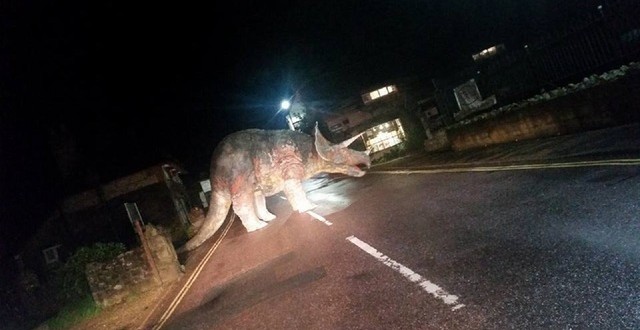 ISLE OF WIGHT — Here’s something you don’t see every day: A triceratops blocking traffic.

The 25ft triceratops was found in High Street, Godshill, Isle of Wight, in the early hours of Saturday.

A local resident posted an image of the triceratops after he stumbled upon it during his drive home from work in the early hours of 13 February.

Chris Hollingshead took to Facebook to express his amusement at having his journey home blocked by the beast. Posting the image on his home page, Hollingshead wrote: “That priceless moment when you’re driving home from work at 3am and the road is blocked by a 20ft triceratops!!”

The owner of the triceratops, Martin Simpson, who also owns the nearby fossil store, Island Gems, said that the dinosaur was part of his “Jurassic Garden”, which also features scientific specimens and plants from the Jurassic period. Simpson told the BBC that he would be taking extra security measures to ensure similar incidents did not happen in future.

Speaking about the incident, Simpson added: “It takes about five blokes to move the dinosaur a couple of inches, so it was definitely a concerted effort and drink was probably involved.”

Adding that the dinosaur is called Godshilla, Simpson said while he was happy that people were talking about the giant model, he didn’t advocate using it as a “traffic hazard”, adding that he bought the dinosaur in 2007 and she was now due for renovation. It is believed that a fence will now be constructed in the Jurassic Garden to prevent people from entering without prior authorisation.

Hundreds of people have now seen Hollingshead’s photo of the Isle of Wight beast, with many dubbing the prank “genius”. However, local residents have said that this isn’t the first time Godshilla has been involved in some tomfoolery. Lisa Choi, owner of local pub The Taverners across the road from Island Gems in Godshill, said that someone had tied balloons around Godshilla’s neck during the Christmas period, telling County Press Online, “They’ve gone one step further this time.”

Triceratops was a member of the plant-eating Ornithischian dinosaur group called the Marginocephalia, so named because of the architectural modifications that grace the rear of its skull. It lived 70 to 65 million years ago, and was one of the very last dinosaurs before they all became extinct 65 million years ago.

Web articles – via partners/network co-ordinators. This website and its contents are the exclusive property of ANGA Media Corporation . We appreciate your feedback and respond to every request. Please fill in the form or send us email to: [email protected]
Previous: Cancer Treatment: Vaccine using patient’s own cells could stop disease returning “Report”
Next: I-70 in Glenwood Canyon Closed After Rock Slide “Photo”