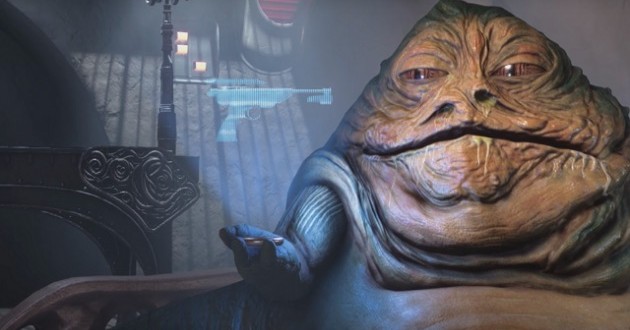 Jabba the Hut may be coming to “Star Wars Battlefront,” if a small clue in a new trailer is to be believed.

The free stuff seen so far has been celebrated by EA in a brief teaser video that, even though it’s only 30 seconds long, still manages to get our Star Wars gland worked up.

Intriguingly though, there’s mention of ‘Hutt Contracts’ – we have no details on what these will actually be, but one assumption touted across communities of Those Who Know Games points towards a system ala assignments in Battlefield 4. Think mini-missions inside each battle, getting to a certain level of kills with a weapon, travelling a certain distance in a vehicle and so on.

We would also assume completing these contracts will result in rewards coming in the form of things like new weapons – and that one’s a safer assumption, given Jabba the Hutt is literally showing off some weapons in the trailer, which you can see here:

All of these additional bits and pieces mentioned are free for those who own Battlefront and – aside from the contracts – are available now. This as opposed to the recently-detailed Outer Rim DLC, which is only for paying customers.

Web articles – via partners/network co-ordinators. This website and its contents are the exclusive property of ANGA Media Corporation . We appreciate your feedback and respond to every request. Please fill in the form or send us email to: [email protected]
Previous: Two homeless men from Saskatchewan arrive in Vancouver to media frenzy
Next: Western University research finds obese women earn less money