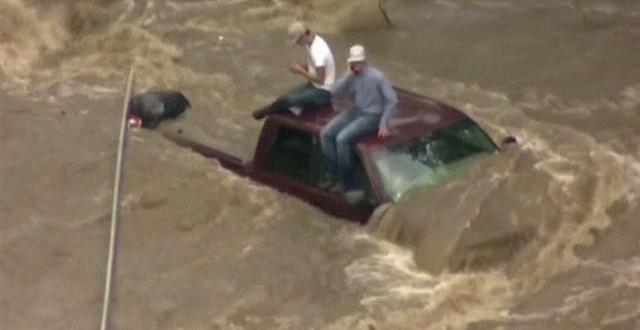 Three people died and 23 were missing in floods after record rains burst the banks of two rivers in Japan in two days, public broadcaster NHK said.

Twenty-two people in Joso, Ibaraki Prefecture, were missing after embankments of the Kinugawa river collapsed on Sept. 10 for the first time in 66 years, flooding about 6,500 houses, authorities said. Another person was missing in Miyagi Prefecture.

In Osaki, Miyagi Prefecture, embankments of the Shibuikawa river crumbled on the morning of Sept. 11, leading to flooding that stranded at least 1,200 residents from about 430 households.

At least 13,000 people evacuated their homes in the Kanto and Tohoku regions as of noon on Sept. 11.

The downpours moved to Miyagi Prefecture and other parts of the Tohoku region in northeastern Japan after drenching Ibaraki and Tochigi prefectures in the northern Kanto region.

The Japan Meteorological Agency issued a special warning against torrential rains to residents in Miyagi Prefecture at 3:25 a.m. on Sept. 11.

According to the NPA, the body of Fumiko Kobayashi, 63, was found at the site of a landslide in the city of Kanuma, Tochigi Prefecture. A 25-year-old man died in Nikko in the prefecture.

In Kurihara, Miyagi Prefecture, a woman was confirmed dead after being found in a car flooded with water. She was identified as Hitomi Takahashi.

Web articles – via partners/network co-ordinators. This website and its contents are the exclusive property of ANGA Media Corporation . We appreciate your feedback and respond to every request. Please fill in the form or send us email to: [email protected]
Previous: Chris Henkey: Pilot Of Burning British Airways Jet Says “I’m Finished Flying”
Next: Downtown Eastside residents dying at an alarming rate, New Study