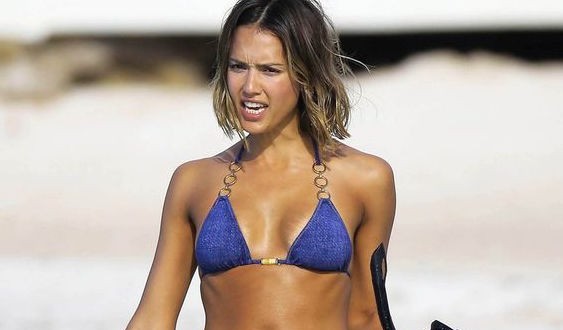 Jessica Alba Is Flawless in Yet Another Sexy Blue Bikini Pic

Jessica Alba Is Flawless in Yet Another Sexy Blue Bikini Pic

Jessica Alba, the Honey actress flaunted her rock-hard abs and toned and tanned legs as she spent a day on the beach in a blue bikini.

The 33-year-old actress is on holiday in the Caribbean with her husband Cash Warren and their daughters Honor and Haven.

Jumping in and out of the sea, Jessica is clearly confident and didn’t give snorkelling a second thought – dragging the goggles into the sea for a swim.

The Into The Blue stunner wore a navy string bikini and brown sunglasses as she soaked up the rays on the luxury island.

Jessica was once crowned the Sexiest Woman In The World by FHM and the Sin City star showed off her toned figure and washboard stomach as she cooled off in the ocean.

While the star is renewed for being very humble, Jessica recently revealed she feels sexier now she is older.

Despite regularly topping sexiest women polls, the star said it wasn’t until she reached her fourth decade that she could appreciate her looks.

The actress now believes she’s never looked better than she does now.

“I think I came into my own physically in my 30s, even when I’d had kids.

“I’m actually smaller now because everything kind of hangs off differently.

“But I feel more like a woman with not such a girl face. I had such chubby cheeks”, she said.

Web articles – via partners/network co-ordinators. This website and its contents are the exclusive property of ANGA Media Corporation . We appreciate your feedback and respond to every request. Please fill in the form or send us email to: [email protected]
Previous: Soleil Moon Frye Weight Loss : Actress Shows Off Her Beach Body After Losing 40 Pounds
Next: Atlantic Salmon Federation Concerned Government Didn’t Notify Public Of Virus, Report