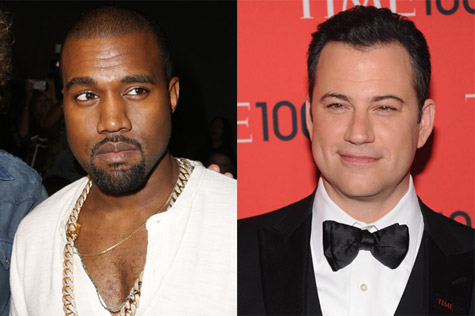 Jimmy Kimmel did parody of a Kanye West interview

Jimmy Kimmel : did parody of a Kanye West interview

Kanye West has just started a feud with late night host Jimmy Kimmel in a series of tweets blasting a spoof that aired on Jimmy Kimmel Live last night.

In the spoof, two young children reenact Kanye‘s recent interview on BBC One that he calls “the first piece of honest media in years.”

“JIMMY KIMMEL IS OUT OF LINE TO TRY AND SPOOF IN ANY WAY THE FIRST PIECE OF HONEST MEDIA IN YEARS,” he tweeted. “JIMMY KIMMEL, I DON’T TAKE IT AS A JOKE…. YOU DON’T HAVE SCUM BAGS HOPPING OVER FENCES TRYING TO TAKE PICTURES OF YOUR DAUGHTER.”

“SHOULD I DO A SPOOF ABOUT YOUR FACE OR YOU FUCKING BEN AFFLECK…#NODISRESPECTTOBENAFFLECK #ALLDISRESPECTTOJIMMYKIMMEL!!!!”

The two apparently had a conversation on the phone earlier today. “I LIKE YOU, YOU KNOW ME, I WENT TO YOUR FAMILY’S WEDDING WHO YOU MADE IT CLEAR TO ME WASN’T YOUR FAMILY WHEN I WAS ON THEN PHONE WITH YOU 5 MINUTES AGO, YOU MANIPULATIVE MEDIA MUTHERFUCKER,” he tweeted.

“SARAH SILVERMAN IS A THOUSAND TIMES FUNNIER THAN YOU AND THE WHOLE WORLD KNOWS IT!!!”

He also posted a photo of Kimmel with the caption, “No Good Pussy.”

Watch the parody and see Kanye’s response below.

UPDATE: Kimmel has responded to Kanye on Twitter. He plans to tell the full story on his show tonight.

“apparently @KanyeWest is VERY VERY ANGRY with me….” tweeted the talk show host. “I’ll tell you the whole story about @kanyewest tonight on the show – this is not a prank, I promise (unless it’s being played on me).”

UPDATE 2: During his show on Thursday, Kimmel told viewers that he received a call from Kanye demanding that he publicly apologize. “Your life he said is gonna be much better if you apologize,” said Kimmel.

He also read his tweets on the air. When it came to the “good pussy” tweet, Kimmel responded, “I’ve seen the video, I know,” referring to Kim Kardashian’s sex tape.

Kanye also told him, “I am the most powerful voice in media. I am Pac.” He continued, “You will never be able to show your face at a 14-year-old’s high school football game and be cool again.”

Kimmel laughed it off, adding, “I don’t know why he’s angry. The bit was I thought pretty innocuous, but finally I’m in a rap feud.”

Web articles – via partners/network co-ordinators. This website and its contents are the exclusive property of ANGA Media Corporation . We appreciate your feedback and respond to every request. Please fill in the form or send us email to: [email protected]
Previous: Sergio garcia overcelebrated beating woods : Anatomy of a feud
Next: Lady Gaga claims perez hilton mocking text injury