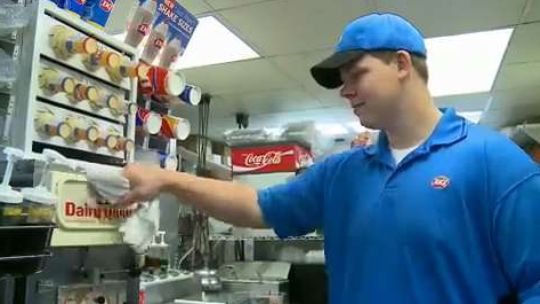 When Joey Prusak saw an old lady steal $20 from a blind man, he did what he thought was right. The 19-year-old Dairy Queen employee refused to serve her.

Prusak, who was working the cash register at a Dairy Queen store in Hopkins, Minn., on Sept. 10, was serving one of his regular customers, who is visually impaired. When the man was checking his pockets for money, he dropped a bill on the floor.

“Right then and there I knew when he dropped that $20 bill, game’s over, he’s not going to know,” Prusak told KARE. “He just kept walking and that’s when the lady picked it up and I thought, she’s going to give it back ’cause she picked it up so quickly.”

The letter to the store explained how the customer saw a blind man had taken his food and sat down inside the store to eat.

Joey went over to him and opened his wallet, giving him $20 of his own cash saying that he wanted to give him the money ‘on behalf of Dairy Queen’ before promising that it had the same face value as the bill he dropped.

‘I was in shock by the generosity that your employee had, taking his own money out of his own wallet to give to the customer because some other lady decided to steal something that wasn’t hers,’ the customer wrote.

He talks about the incident, which happened on September the 10th, in the most modest of manners.
‘[After the visually imparied man gave his order] right then and there I knew when he dropped that $20 bill, game’s over, he’s not going to know,’ explained Mr Prusak to KARE11.

‘He just kept walking and that’s when the lady picked it up and I thought, she’s going to give it back ’cause she picked it up so quickly.’

Mr Prusak said he then saw the woman her put the money in her purse. He didn’t know what to say, at least not at first.

When the customer reached the counter for her order, Joey confronted her. She claimed the money was hers and he said it wasn’t.

‘I said, ma’am I’m not going to serve someone as disrespectful as you, so you can either return the $20 bill and I’ll serve you, or you can leave,’ explained Prusak. ‘And she goes well it’s my $20 dollar bill, and I go, we’ll then you can leave.’

Web articles – via partners/network co-ordinators. This website and its contents are the exclusive property of ANGA Media Corporation . We appreciate your feedback and respond to every request. Please fill in the form or send us email to: [email protected]
Previous: YotaPhone : Double-sided Russian smartphone to take on market leaders
Next: NYC train engineer ‘zoned out’ before deadly crash : Official