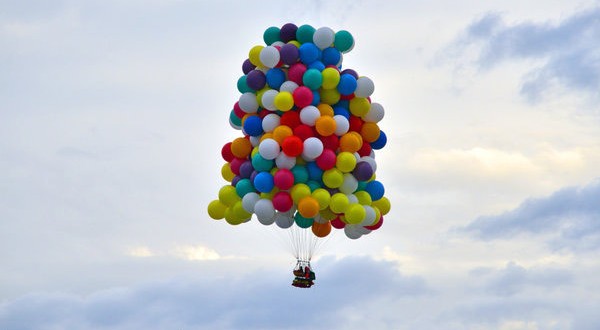 The balloonist who took off from northern Maine early Thursday morning on what he hoped would be a record-breaking trans-Atlantic flight is on the ground after landing in Newfoundland around 6:30 p.m.

Few details are available on what cut Jonathan Trappe’s cluster balloon flight short, but according to a post he made on his Facebook page he is in a remote location.

“Landed safe, at an alternate location. Remote,” Trappe posted around 7:45 p.m. “I put the exposure canopy up on the boat. Will stay here for the night.”

A topographical map of the area near where Trappe landed shows he is about a mile from the coast and about 5 miles from the nearest road.

Trappe’s epic attempt to be the first to cross the Atlantic Ocean using hundreds of helium-filled balloons instead of one large air-filled bladder began at 6:30 a.m. Thursday when he lifted off from a ball field in Caribou.

Several global positioning websites were tracking his progress, which at one time showed him to be at an altitude of 21,000 feet and moving at a top speed of 68 mph.

At 6:27 p.m., according to the website http://tinyurl.com/TrappeInReach, which posted updates every 10 minutes, Trappe was at 5,000 feet. Ten minutes later, the tracking site indicated he was at 150 feet, moving 0 mph.

At 4:27, Trappe’s GPS coordinates showed him to be at 18,500 feet over the Gulf of St. Lawrence and moving 58 mph. Over the next two hours those readings show a steady drop in altitude and speed as he approached the western edge of Newfoundland.

At 6:27 his cluster balloon vessel was down to 5,900 feet and moving around 34 mph as he passed over land and presumably drifted down to solid ground at 6:37 p.m.

Trappe is a “cluster balloonist” — think the Disney movie “Up,” in which the hero used thousands of small balloons to lift his house and float away to South America.

“I will use 365 individual balloons and I anticipate an inflation time of roughly 12 hours with 50 volunteers,” Trappe said in an interview with the Bangor Daily News last February. “The balloons are commercially available and are typically used for events such as open houses or for promotional purposes [and] it is fair to say that their manufacturers never intended them to be used for manned flight [because] they are toy balloons.”

Scores of volunteers had spent the previous night and early morning hours inflating and then assembling the 370 balloons into “clusters” and affixing them to the Maine-made “Pudgy” survival boat Trappe was using as a gondola.

“Hmmm, this doesn’t look like France,” Trappe posted on his Facebook page minutes before his announcement that he had landed.

There is no word on when or how a recovery effort for the adventurer and his equipment will be carried out.

Web articles – via partners/network co-ordinators. This website and its contents are the exclusive property of ANGA Media Corporation . We appreciate your feedback and respond to every request. Please fill in the form or send us email to: [email protected]
Previous: Nuisance skunks in Buffalo were trapped and killed by city officials
Next: Tabitha Leah Ritchie baby bump was cold and hard