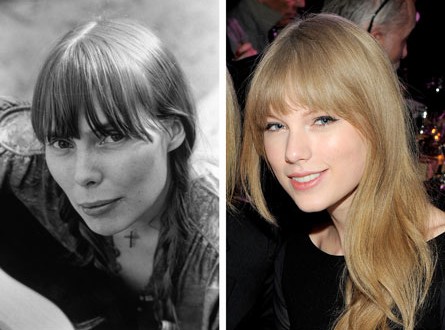 Music legend Joni Mitchell says she stopped plans for Taylor Swift to play her in a biopic based on Sheila Weller’s book Girls Like Us. The book traces the story of a trifecta of singer/songwriters – Mitchell, Carly Simon and Carole King.

Back in 2012 it was rumoured that Taylor Swift was about to sign on to play legendary musician Joni Mitchell in the film adaptation of Sheila Weller’s book ‘Girls Like Us’, which features the lives of famous female musicians like Joni, Carly Simon and Carole King. However, Joni herself has now revealed she put a stop to the casting with a pretty harsh line.

Speaking to ‘The Sunday Times’ recently, the singer says that the choice of Swift had more to do with looks than talent. “I squelched that! I said to the producer, ‘All you’ve got is a girl with high cheekbones.’ Mitchell also criticised the screenplay, saying “It’s just a lot of gossip, you don’t have the great scenes…There’s a lot of nonsense about me in books. Assumptions, assumptions, assum­p­tions.”

At the time Taylor, who recently told Rolling Stone “I used to cry about Joni Mitchell all the time after a few glasses of wine”, spoke about her desire to be part of that kind of project. “I would love to sign on to do a movie if it was the right role and if it was the right script, because I would be taking time away from music to tell a big grand story, and spend all of my time and pouring all of my emotions into being someone else. So for me to do that, it would have to be a story worth telling.”

Since then the new Queen of Pop has made her movie debut in 2010’s ‘Valentine’s Day’ and then had a small role in this year’s ‘The Giver’.

Web articles – via partners/network co-ordinators. This website and its contents are the exclusive property of ANGA Media Corporation . We appreciate your feedback and respond to every request. Please fill in the form or send us email to: [email protected]
Previous: Halifax police find human remains while investigating Catie Miller murder (Video)
Next: Two new species of horned dinosaurs discovered from museum fossils