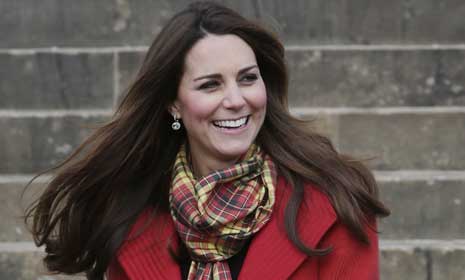 Kate Middleton, aka Catherine, the Duchess of Cambridge, turns 32 today—and my, what a year she’s had! Perhaps the biggest moment so far came after months (let’s be honest, years) of worldwide speculation, Kate and her husband Prince William welcomed a son, baby George Alexander Louis.

“William’s been trying to get Kate’s surprise sorted for January 9 when she turns 32,” a source told Closer Magazine. “When he met Taylor Swift recently he asked her if there’s any likelihood she’s in the UK for the New Year, or just after, because he knows Kate’s a fan and she’s love to meet the singer.”

In the past he has presented Middleton with some very lavish gifts including pearl earrings and a romantic trip to Scotland. Last year for her 31st birthday Prince William took Middleton, her parents, her brother and sister to a Cirque du Soleil show.

Earlier, Middleton’s mom was spotted doing some last minute shopping in anticipation of the birthday celebrations.

“Carole came into London from Bucklebury for a shopping spree on the Kings Road… She spent about an hour and half in peter Jones where she was browsing and purchasing items from the Lancôme counter,” a source told E! News.

Web articles – via partners/network co-ordinators. This website and its contents are the exclusive property of ANGA Media Corporation . We appreciate your feedback and respond to every request. Please fill in the form or send us email to: [email protected]
Previous: Gabby Giffords Skydives to Celebrate Life (VIDEO)
Next: ‘Wahlburgers’ premiere party is a sell out an hour