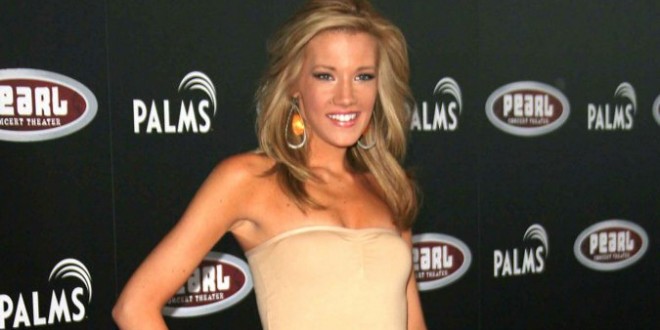 Katie Rees has been arrested for the second time in months after she was charged with felony possession of meth, the Las Vegas Sun reports.

Katie Rees was a passenger in her boyfriend Kevin Sims’ car. She was Miss Nevada in 2007 but was stripped of her crown when sexually explicit pictures of her surfaced.

According to the arrest report, Metro Police pulled over Sims after he failed to use his turn signal several times. Sims had outstanding warrants for his arrest.

During the traffic stop, police said they could smell marijuana and conducted a search finding two bags that belonged to Rees.

Katie Rees admitted she had smoke methamphetamine earlier, the report said. She also acknowledged that some of the items in the bags belonged to her.

According to the arrest report, police found narcotics paraphernalia including rolling papers and pipes, a canister containing marijuana, a small baggie of methamphetamine, a Xanaz pill and a Oxycotin pill.

At the time of his arrest, Sims told police, “Nothing in that car is hers.”

Katie Rees has been arrested in the past for drug possession.

Web articles – via partners/network co-ordinators. This website and its contents are the exclusive property of ANGA Media Corporation . We appreciate your feedback and respond to every request. Please fill in the form or send us email to: [email protected]
Previous: Cindy Crawford: Supermodel Covers Elle Canada, Opens Up About Leaked Unretouched Photo
Next: Millennium Falcon Drone Lets You Play Han Solo ‘Video’