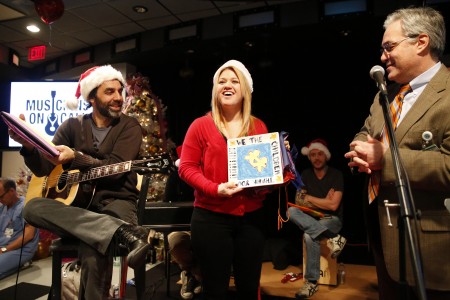 After spending much of her year on a world tour, Kelly Clarkson has earned a little time off for the holidays — but the Nashville singer squeezed in one more very special concert last week, singing Christmas carols for the patients, families and staff at Monroe Carell Jr. Children’s Hospital at Vanderbilt.

“This is such a special time of year and I’m so happy to be able to share it with all of these great kids,” Clarkson said in a release. “I’m probably having just as much — if not more — fun than they are.”

Clarkson, who recently released her Greatest Hits – Chapter One album, visited with the children and performed an acoustic set in the Children’s Hospital Theatre. The songstress led the packed room in a sing-along of her favorite holiday carols including “Rudolph the Red Nose Reindeer,” “White Christmas,” and “All I Want for Christmas is You.” Clarkson encouraged singing and dancing, and the children were happy to oblige. Following the show, the kind-hearted entertainer generously offered to visit the rooms of patients unable to attend.

“This is such a special time of year and I’m so happy to be able to share it with all of these great kids. I’m probably having just as much, if not more, fun than they are,” exclaimed Clarkson. “I heard about Musicians On Call from a friend of mine,” she continued, “and I thought this would be the perfect way to get involved with a hospital music program here in Nashville. I love playing for the kiddos!!”

MOC Nashville is celebrating its fifth anniversary this year and since its inception, the Music City branch has grown to provide 11 weekly bedside performance programs throughout six area healthcare facilities and has played for over 60,000 patients. With the help of artists like Clarkson, Brantley Gilbert, Hunter Hayes, Martina McBride, Jerrod Niemann, Kellie Pickler, Darius Rucker, Blake Shelton, and so many more, MOC Nashville will continue to expand its reach within the Nashville community and deliver the healing power of music to those who need it most.

Web articles – via partners/network co-ordinators. This website and its contents are the exclusive property of ANGA Media Corporation . We appreciate your feedback and respond to every request. Please fill in the form or send us email to: [email protected]
Previous: Dying Teen inspires Breaking Bad writer : Reports
Next: Adam Jones : Player nominated for Roberto Clemente award