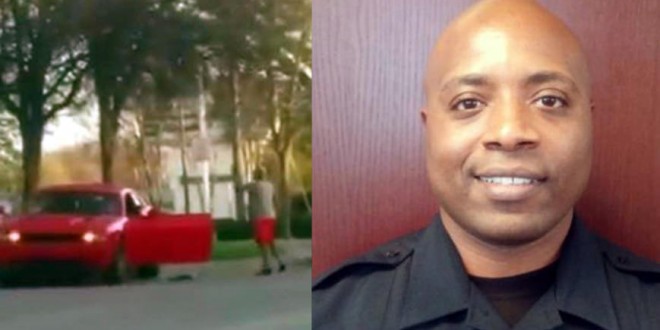 Ken Johnson, Cop who fatally shot a 16-year-old and wounded another juvenile has been arrested charges of murder and aggravated assault.

The incident occurred March 13 in Addison, a city located some 200 miles south of Dallas.

ABC News reports that the Addison Police Department executed an arrest warrant for Ken Johnson, an officer for the force in Farmers Branch, another Dallas suburban city. He was taken into custody Wednesday (March 16) just before 6 p.m. without incident and booked into the Dallas County Jail.

“Based on our investigation thus far we had probable cause to make the arrest this evening,” Paul Spencer, Addison’s police chief,told reporters. “But this is a rapidly-evolving situation and it remains an active investigation.”

As such, no further details will be released during the course of the police investigation, he added.

“Therefore, we are refraining at this time from discussing the evidence collected thus far or about the specifics of this case. We expect there are still several weeks of additional investigative work to do.”

The police officer’s arrest stems from an incident during which he saw a car being burglarized in his Farmers Branch apartment complex. He gave chase in his car, pursuing them into Addison.

An subsequent altercation led to the shooting death of Jose Raul Cruz, 16. Another juvenile who was a passenger in the vehicle who also was shot an later hospitalized.

Addison police said it is working on the case with help from the Dallas County District Attorney’s office.

Web articles – via partners/network co-ordinators. This website and its contents are the exclusive property of ANGA Media Corporation . We appreciate your feedback and respond to every request. Please fill in the form or send us email to: [email protected]
Previous: Ryan Collins: “Pennsylvania man” will plead guilty in ‘Celebgate’ nude photo hack, Report
Next: Tully monster: researchers Solve Decades-Long Puzzle of Alienlike Creature