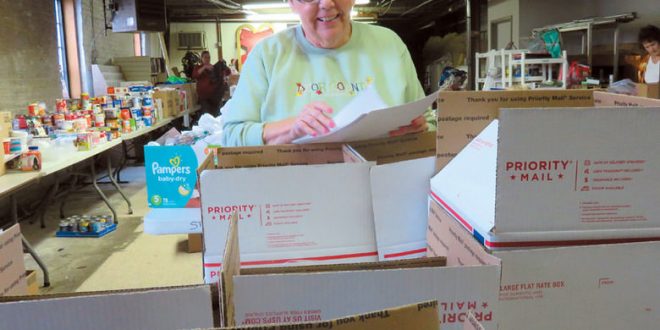 LeAnn Boudwine has two sons in the military. She would support them by sending care packages in the mail. After receiving one package, LeAnn’s sons told her the heartbreaking truth: not everyone serving our country gets care packages.

That’s when LeAnn decided to get organized. She got volunteers, neighbors, families and their children, and even veterans to help pack items to send overseas. The mother is ready to send out her 10,000th package. These latest boxes even have a Christmas theme.

“It started small, but the more we heard how much it meant to these heroes to know that people back home had not forgotten about them, the more it keep growing and growing,” Boudwine said. “We never thought we’d still be doing it, but there are so few groups like ours that it would break our hearts to stop.”

Volunteers from around the area help Boudwine assemble the packages.

“The community support throughout the year has been overwhelming,” she said.

“When people ask what we need, I say that they need all of those little things that we take for granted in our daily lives,” Boudwine said.

Boudwine hopes to send the charity’s 10,000th care package by the end of the year.

“When I say that number, I have a hard time believing it,” she said.

While the group sends out many packages during the holidays, packages are also sent throughout the year, Boudwine said.

“Why do we do this? Because of the letters we get,” she said. “Soldiers tell us how good it makes them feel to know that we are thinking about them. I get teary just thinking about it.”

Web articles – via partners/network co-ordinators. This website and its contents are the exclusive property of ANGA Media Corporation . We appreciate your feedback and respond to every request. Please fill in the form or send us email to: [email protected]
Previous: Ice Bucket Challenge inspiration: Man Behind ALS Ice Bucket Challenge Dead
Next: Teen has 50 surgeries to look like Angelina Jolie (Photo)