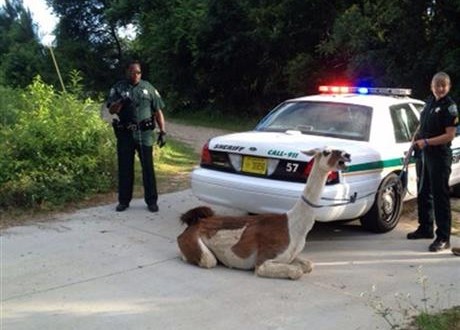 Floridians know there’s no shortage of wildlife in the Sunshine State, but kangaroos and llamas?

While Pasco Sheriff’s deputies were capturing a kangaroo that was on the loose in Lacoochee, deputies in Tallahassee had to use a taser gun to re-capture a llama that had escaped his pen.

Pasco County Sheriff’s deputies, along with Florida Fish and Wildlife Conservation Commission officers, caught the kangaroo Sunday afternoon in the area of 38316 Mickler Road in Lacoochee. According to a Sheriff’s Office press release, the five-foot tall, 200-pound animal had been on the loose since Saturday night and had led deputies on a lengthy chase at one point.

Right now, it’s not clear who owns the kangaroo. While a family living along Mickler Road has a kangaroo farm, they haven’t claimed the animal. Sheriff’s officials say someone can own a kangaroo if they have the proper permits.

The animal, who’s apparently in good shape, is being held in a pen in Lacoochee.

Meanwhile, the Associated Press reports that a llama named “Scooter” apparently escaped his penned-in yard in Tallahassee Friday night, then kept Leon County Sheriff’s deputies on the pursuit for a while Saturday.

The 6-foot-tall, 7-year-old llama outran the authorities in Tallahassee for a while, even leaping over a 4-foot fence to avoid capture, Leon County Lt. Tony Drzewiecki said Sunday.

“Scooter was running in the middle of the road, so he was going to cause an accident eventually,” Drzewiecki said.

Authorities also heard from concerned residents. One reported a camel on the loose; another claimed to have spied an alpaca trotting by.

Police cornered the furry fugitive Saturday morning. After putting a lasso around its neck, it took six deputies to place the roughly 300-pound Scooter into a trailer. Drzewiecki said they used a taser gun to subdue the animal because llamas don’t respond to voice commands.

Drzewiecki added that Scooter’s owner, Jack Conrad, won’t be cited and has agreed to add to his fence line. As a domestic species, owners don’t have to have a permit for llamas.

Web articles – via partners/network co-ordinators. This website and its contents are the exclusive property of ANGA Media Corporation . We appreciate your feedback and respond to every request. Please fill in the form or send us email to: [email protected]
Previous: Julia Caples believes drinking blood keeps her young and vigorous
Next: Mutant cockroaches evolved to find sweet jelly bitter