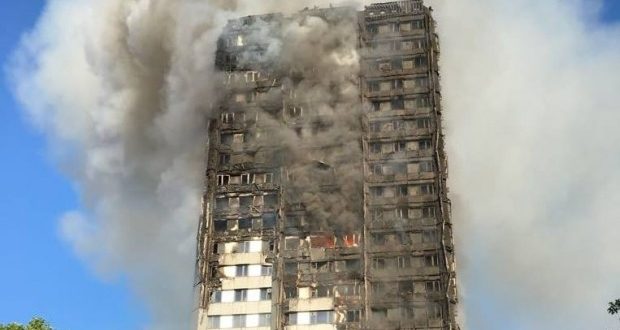 At least six deaths were confirmed early Wednesday after a blaze ripped through a high-rise apartment block in the British capital as residents slept. At least 74 people were injured, according to authorities.

The fire continued to rage throughout the building on Wednesday morning, with reports suggesting there were still people trapped inside the residential block in west London.

Emergency services were contacted shortly before 1am in the capital, with 200 firefighters being deployed to the area along with 40 fire engines. Along with ambulance crews, the firefighters are continuing to tackle the blaze.

“I can confirm six fatalities at this time but this figure is likely to rise during what will be a complex recovery operation over a number of days,” London Metropolitan Police commander Stuart Cundy said.

London Fire Commissioner Danny Cotton said it was an “unprecedented situation”, confirming that the fire “has affected all floors of this 24 storey building, from the second floor up”.

“At this time I am sad to confirm that we now know that there have been fatalities,” Cotton said in a statement early on Wednesday.

The cause of the fire has not yet been established, while a structural engineer has concluded that the tower is not in danger of collapsing.

Local councillor Judith Blakeman, who lives across the road from Grenfell Tower, said there was between 400 and 600 people living in the block.

London mayor Sadiq Khan said that he was “devastated” at the scenes that were unfolding at Greenfell, and vowed to provide answers for those in the city.

“My heart goes out to everyone affected. I am sad to confirm that we now know there have been fatalities and more than fifty people have been taken to hospitals including Royal Free, King’s St. Thomas’s, St Mary’s and Chelsea and Westminster to be treated for injuries,” Khan said.

He continued: “There will be a great many questions over the coming days as to the cause of this tragedy and I want to reassure Londoners that we will get all the answers.”

Grenfell Tower, built in the 1970s as part of a larger social housing complex in the Lancaster West estate in north Kensington, underwent a £10m refurbishment in 2016.

Following this, the tower received a fire risk assessment last June and was assessed as being a “medium” fire risk, defined as presenting a normal fire risk.

Web articles – via partners/network co-ordinators. This website and its contents are the exclusive property of ANGA Media Corporation . We appreciate your feedback and respond to every request. Please fill in the form or send us email to: [email protected]
Previous: Scientists list top alien species invaders on islands
Next: Drones ‘could deliver help to heart patients’, research suggests