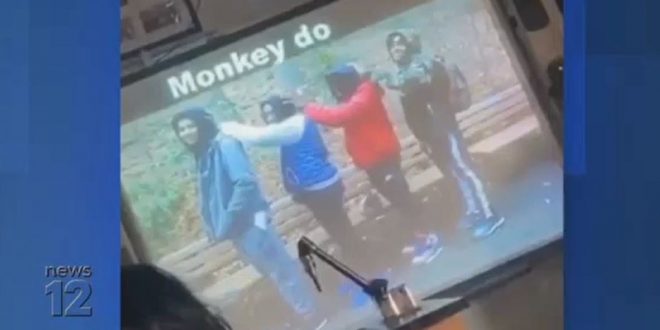 Four Long Island high school students have filed a $12 million lawsuit, accusing their advanced zoology teacher of comparing them to monkeys in a classroom slideshow.

The young men, who are African-American, say while at the Bronx Zoo their teacher, who is white, took a photo of them lined up touching each other’s hair.

The Longwood High School students said about a month later, there was a slideshow shown in class that featured a photo of monkeys and then the students with the caption “monkey see, monkey do.”

The students say they are upset, disgusted and angry.

One student also claims he was threatened with suspension after complaining.

The parents and grandparents of the student say a few years ago, a similar photo with African-American female students was shown during a slideshow.

In a statement, the district says the photo was a lapse in judgement and the district will provide sensitivity training.

“For the past several years, the high school teacher has taken a similar photo of students for use in a classroom PowerPoint presentation. This particular photo was an unfortunate lapse of judgment,” the statement read in part. “Without the intent of doing so, the photo was taken without fully understanding the sensitivity or the hurt it may have caused and reminds us that we must be more aware of the feelings of our multi-cultural population.”

The students are not allowed back in that class, according to their attorney, John Ray, who said the teacher is the one who should be out of the classroom, not the students.

Web articles – via partners/network co-ordinators. This website and its contents are the exclusive property of ANGA Media Corporation . We appreciate your feedback and respond to every request. Please fill in the form or send us email to: [email protected]
Previous: Justin Bieber Lyme disease, ‘I Will Be Back & Better Than Ever’
Next: Slovenia Trump statue Destroyed in Fire