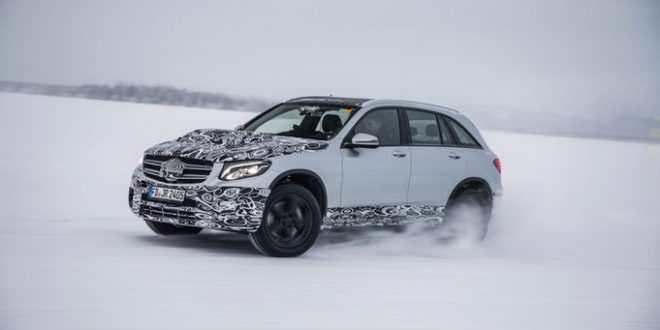 Mercedes-Benz has confirmed plans of its first series production plug-in fuel cell model, the GLC F-Cell, to be revealed at next week’s Frankfurt motor show. The new dual hydrogen and electric propelled model is planned to go on sale in selected markets in 2018.

The Mercedes-Benz GLC F-Cell combines fuel cell and battery technology with a plug-in hybrid. A prototype model was seen at the 2016 Paris Motor Show. It had an estimated combined total range of approximately 311 miles.

In addition to relying on hydrogen for fuel, the F-Cell is fitted with a charge socket to juice up its 9-kWh lithium-ion battery, which provides an estimated 31 miles of range on battery power alone. This should come in handy as owners desperately search for the nearest hydrogen fueling station to fuel up.

The hydrogen tanks are installed between the SUV’s axles, along with gas seals and valves, and other high-voltage components.

Mercedes-Benz is one of several automakers that have been developing fuel cell technology for three decades. It has built and tested over 300 prototypes while logging millions of miles in all kinds of weather conditions.

The automaker plans to sell the hydrogen powered plug-in in the U.S. before the end of the decade.

Official range details and other information about the Mercedes-Benz GLC F-Cell will be announced when the SUV makes its official debut in Frankfurt on September 12.

Web articles – via partners/network co-ordinators. This website and its contents are the exclusive property of ANGA Media Corporation . We appreciate your feedback and respond to every request. Please fill in the form or send us email to: [email protected]
Previous: Kenneka Jenkins: Chicago woman found dead in freezer of Rosemont hotel
Next: Do aliens exist? Three UFOs catch up speed of ISS (Watch)