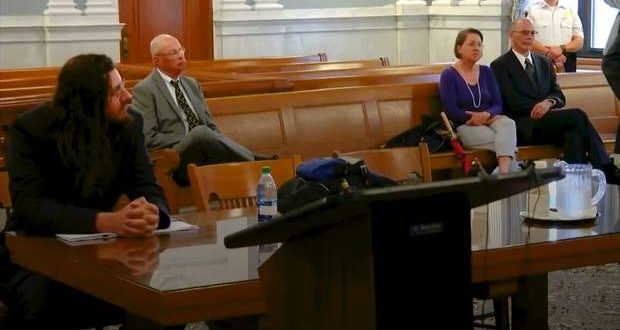 Michael Rotondo refuses to move out of his parents’ house.

Parents Mark and Christina Rotondo took legal action against their son after he ignored their eviction letters and offers of financial support.

Rotondo, who was acting as his own lawyer, argued he should be entitled to six more months at home before being evicted because he was family.

The parents sent five eviction letters to Rotondo between February 2 and March 30. The letters did not give reasons for the eviction, but they offered Rotondo money to assist with the move.

“There are jobs available even for those with a poor work history like you … Get one — you have to work!”

They signed off the letter with: “Christina and Mark Rotondo”.

A letter dated February 2 said: “You have 14 days to vacate. You will not be allowed to return. We will take whatever actions are necessary to enforce this decision.”

On Tuesday, Rotondo said he was still living at home. He didn’t speak to his parents, but he was still unprepared to leave.

The judge said: “I want you out of that household” and asked the parents’ lawyer, Anthony Adorante, to send Rotondo an official eviction order.

Adorante said the parents would give Rotondo a fair amount of time to vacate the property.

Rotondo will be appealing the decision.

Web articles – via partners/network co-ordinators. This website and its contents are the exclusive property of ANGA Media Corporation . We appreciate your feedback and respond to every request. Please fill in the form or send us email to: [email protected]
Previous: $1 million Trump inaugural gift? Donation to President inauguration traced
Next: Belgian mechanic destroys F-16: accidentally fired on the ground