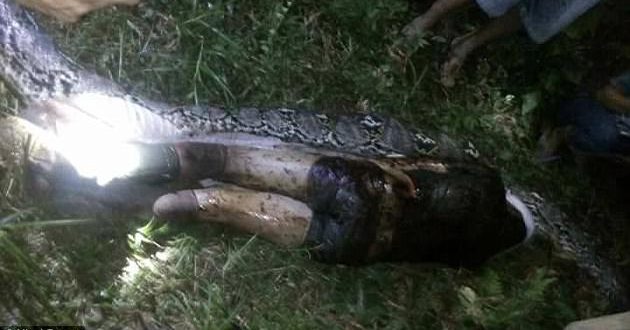 A missing Indonesian man’s lifeless body has been found in the stomach of a 23-foot long python, who appears to have swallowed the victim whole.

Akbar Salubiro, 25, first went missing on March 25 after he went out to harvest palm oil in a remote village on the island of west Sulawesi, Indonesia.

Salubiro lived in a village on the island of West Sulawesi, Indonesia, with his wife and two kids.

The young father left to harvest palm oil one day, but didn’t make it past his back garden, where a reticulated python had grabbed hold of him, suffocated him and slowly swallowed the man’s body whole.

According to Elite Daily, Salubiro Junaidi, the village secretary, said, “People had heard cries from the palm grove the night before Akbar was found in the snake’s stomach.”

With his wife away, it was friends and family members who noticed that Salubiro was missing and began the search.

They quickly found the swollen, massive python in the missing man’s backyard and noticed a bulge in the serpent’s stomach that, terrifyingly, matched the shape of boots.

They took it upon themselves to confirm their suspicions.

Images show that Salubiro was, in fact, still wearing his boots, along with his shorts and T-shirt.

His wife had not yet returned to the village — nor had she heard the news from friends and family of her husband’s death — when she saw the images, videos and stories of the grotesque find swarming the internet.

Large pythons need large animals to satisfy their energy requirements. When the prey has been asphyxiated it is swallowed in full. It takes the python from one to several days to digest a prey, and pythons are generalist regarding prey choice.

Even though most pythons have fairly large teeth, they only use them to hold the prey and to swallow. Python teeth angle backward to keep hold on prey during constriction. Naturally, most prey are swallowed head first as this reduce resistance.

How fast can pythons move?

Pythons are in fact rather slow animals if moving is about travelling from one place to another. However, it is not very often they have to move very far in a hurry; that means that python do not track prey down. Also, when they have eaten a prey and digested it they often do not have to eat anything again for weeks or months, and don’t have to go hunting for food.

However, as pythons are carnivorous, they need some food from time to time, and must be able to move fast when they are hungry. And they certainly are.

Web articles – via partners/network co-ordinators. This website and its contents are the exclusive property of ANGA Media Corporation . We appreciate your feedback and respond to every request. Please fill in the form or send us email to: [email protected]
Previous: Got camera? Facebook to add “Stories” to its Main app
Next: Sands in Saturn’s Largest Moon Are Electrically Charged, Says New Research