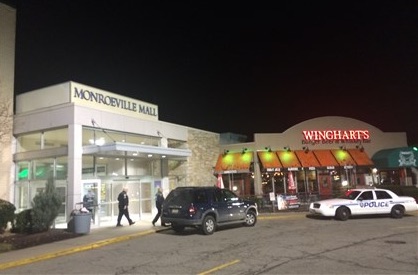 MONROEVILLE, PA —The Monroeville Mall was closed early Friday; shortly before 9pm due to several fights breaking out inside the mall.

Cole says large groups of teens began showing up around 5 p.m., with the crowds swelling to as many as 1,000, according to mall security officers. Cole says he doesn’t believe it was an organized event or protest.

Employees say stores closed early after fights were reported around 8 p.m. Cole reports minor damage to the mall, including to kiosks.

Cole says he expects officers to issue disorderly conduct citations. He says two arrests for fighting were related to an earlier domestic dispute.

Web articles – via partners/network co-ordinators. This website and its contents are the exclusive property of ANGA Media Corporation . We appreciate your feedback and respond to every request. Please fill in the form or send us email to: [email protected]
Previous: Brittany Snow Bullied : ‘Pitch Perfect 2’ Star Opens Up About Bullying
Next: Four men arrested after Christmas diners robbed (Video)