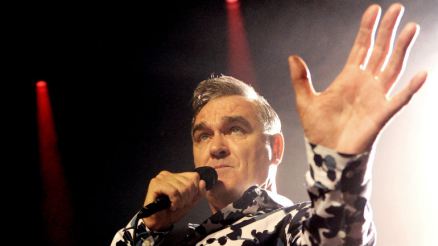 What Americans call Thanksgiving, Morrissey not-so-sweetly refers to as “Thankskilling.”

The “Meat is Murder” singer is out there stumping for those poor defenseless turkeys, and this time around his fury is directly aimed at President Obama and the annual White House turkey pardon, which this year is taking on a Hunger Games theme.

In a statement, Morrissey writes, “Please ignore the abysmal example set by President Obama who, in the name of Thanksgiving, supports torture as 45 million birds are horrifically abused; dragged through electrified stun baths, and then have their throats slit. And President Obama laughs… Further, the meat industry is responsible for 51 per cent of human-caused greenhouse-gas emission, therefore the embarrassingly stupid White House ‘turkey pardon’ is open support for a viciously cruel and environmentally irresponsible industry.”

Anyone enjoying a vegan Thanksgiving feast this year will be the ones truly “pardoning” a turkey. Maybe next year the Obamas will consider a new tradition involving a Tofurky. Hey, it could happen! Just look at Clinton and Gore!

Web articles – via partners/network co-ordinators. This website and its contents are the exclusive property of ANGA Media Corporation . We appreciate your feedback and respond to every request. Please fill in the form or send us email to: [email protected]
Previous: Amelle Berrabah opens up about 2010 arrest (VIDEO)
Next: Victoria Falls plunge : Tourist survives 15m gorge fall in Zambia