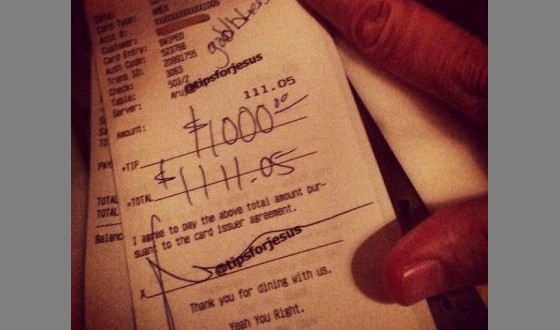 The US$111.05 (S$139.42) New York restaurant receipt dated Dec 7 includes a US$1,000 tip and the words “god bless!” scrawled across it. The handle @tipsforjesus is stamped next to an illegible signature.

In recent weeks, similar tabs have popped up in restaurants from coast to coast and even in Mexico, with tips of as much as US$10,000 — all charged to American Express.

While his identity is a secret, here’s what you’ll want to look out for:
A middle-aged man who sometimes travels with a woman.

The guy likes his liquor, but who doesn’t? He’s ordered bourbon at one place and at another, ordered five ounces of the restaurant’s most expensive whiskey (it was $70 an ounce).
He always pays with American Express.

Speaking Spanish won’t get trip him up. (Which makes me wonder, is he the most interesting man in the world? Although I can’t imagine someone who drinks Dos Equis as having a sophisticated enough palette to spend $70 on an ounce of whiskey.)
If you do run across him, he’s going to ask to get a picture of the receipt – so he can post it to his Instagram account, which has more than 50,000 followers. But surely you won’t mind, especially if the price is right.

Web articles – via partners/network co-ordinators. This website and its contents are the exclusive property of ANGA Media Corporation . We appreciate your feedback and respond to every request. Please fill in the form or send us email to: [email protected]
Previous: Man catches 18 pound lobster (PHOTO – VIDEO)
Next: Scientists have revealed the supervolcano lurking beneath Yellowstone National : new study