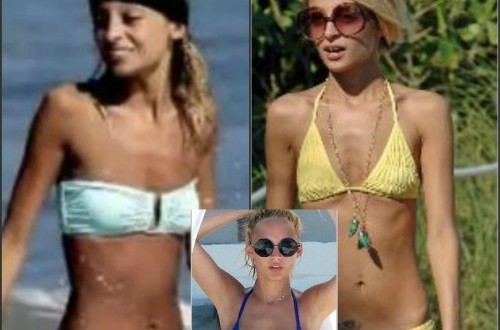 Nicole Richie celebrated her 30th birthday with a vacation in Cabo San Lucas, Mexico. She spent her sunny getaway hours rocking several sexy bikinis that showed off her new breast implants to their best advantage.

The former Simple Life reality star had the surgical procedure earlier this summer and hasn’t commented publicly, though her close pals were all in the loop on her decision.

An insider tells the new issue of Us Weekly — out now! — that the Fashion Star mentor got implants this summer.

“In the past, she said she wanted a lift, though we never thought she was serious,” another source says of Richie.

Still, “she’s been open about it to friends,” notes the first insider.
Richie flaunted her fuller physique while vacationing with pals in Mexico September 24 — a stark contrast to the flat-chested bikini body she showed off just one year earlier.

The second source adds that the House of Harlow 1960 designer wanted to improve her bustline for hubby Joel Madden, 32. “The pregnancies took a toll. She said breast-feeding killed what boobs she did have!”

Web articles – via partners/network co-ordinators. This website and its contents are the exclusive property of ANGA Media Corporation . We appreciate your feedback and respond to every request. Please fill in the form or send us email to: [email protected]
Previous: Denise richards : had three breast augmentations Surgeries
Next: Jennifer Aniston : Actress has bad Big Mac reaction