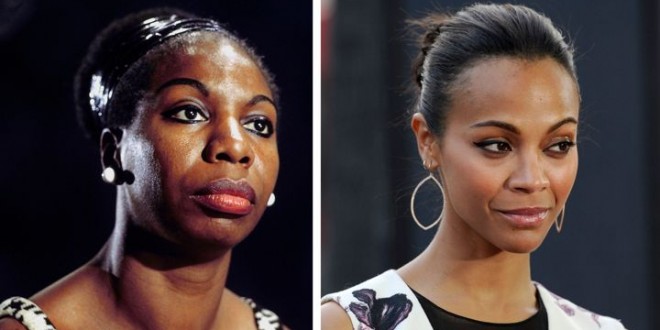 The Avatar beauty has faced a backlash from the late jazz singer’s fans ever since landing the lead role in Nina in 2012, with some claiming the actress, who is of Dominican and Puerto Rican descent, looked nothing like Simone.

The controversy was reignited on Wednesday when the first trailer for the long delayed project was released, and appeared to show Zoe’s skin had been darkened with make-up to better resemble the African-American musical icon.

Zoe promoted the film by taking to Twitter to share a quote from Simone, but representatives for the singer’s estate, who have opposed the biopic from the start, were not pleased with the post and snapped back at the 37-year-old, telling her to “please take Nina’s name out your mouth (sic)”.

Nina’s brother, Sam Waymon, subsequently accused Zoe and the film’s writer/director Cynthia Mort of insulting his late sibling by “painting up” a light-skinned actress to portray her onscreen, while he even went so far as to slam them for “raping Nina’s legacy”.

However, Nina’s daughter, Lisa Simone Kelly, has since stepped up to defend Zoe from the nasty attacks and remarks made by her uncle and her mother’s estate officials.

In a new interview with Time magazine, Lisa insists she is “not upset” at Zoe’s casting, although that’s not to say she approves of the biopic itself.

“It’s unfortunate that Zoe Saldana is being attacked so viciously when she is someone who is part of a larger picture,” Lisa said. “It’s clear she brought her best to this project, but unfortunately she’s being attacked when she’s not responsible for any of the (film’s) writing or the lies.”

The 53-year-old singer/actress, who previously admitted Zoe is not the “best choice” to portray Nina, goes on to explain her main issue with the movie, which focuses on an alleged affair between Simone and her manager Clifton Henderson, portrayed by David Oyelowo.

“The movie is about a relationship between my mother and Clifton that never took place,” Lisa stated, insisting Henderson was gay. “They never had an amorous relationship.

“The project has been tainted from the very beginning. Clearly, it is not the truth about my mother’s life and everyone now knows that. This is not how you want your loved ones remembered.”

Zoe has yet to respond to the renewed backlash.

Nina is set for release in April.

Web articles – via partners/network co-ordinators. This website and its contents are the exclusive property of ANGA Media Corporation . We appreciate your feedback and respond to every request. Please fill in the form or send us email to: [email protected]
Previous: Jonah Hill raps with Future but sinks in sketches (Video)
Next: ‘Zootopia’ Box Office Success Proof of Disney Animation Renaissance (Trailer)