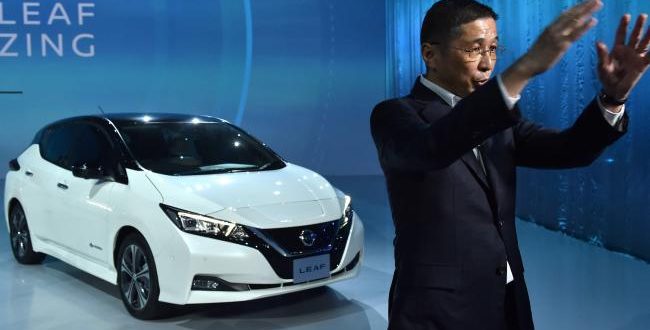 The Leaf’s unveiling brings only limited surprises, having already been partly revealed and detailed through the usual media leaks. But, importantly for EV fans – and perhaps for detractors, too – today’s flood of data confirms the numbers brought you in August.

The old model, with 80kW of power and 280Nm of torque, could be considered comparable with the average entry-level turbo petrol hatch of today’s market – although its electric propulsion did give it the advantage of proper pulling power from a standing start.

For 2018, Nissan hasn’t exactly pointed its bat at the hot-hatch market, but, this time with 110kW and 320Nm on offer – the latter from zero rpm through to 3283rpm – it’s tough to say the new Leaf isn’t starting to sound like a compelling option.

Before you get too excited, note: no acceleration figures have been offered at this point. Still, with the old model capable of ambling to 100km/h in about 12 seconds, this new should be able to get there in less than 10.

To that end, Nissan says: “Existing LEAF drivers already love the instant response and linearity of performance as they navigate the city. The new LEAF’s improved acceleration will boost enjoyment even further.”

No surprise, Nissan’s ProPilot autonomous technology will feature, giving the new Leaf some amount of assisted and self-driving capability on-the-go – although none not already available in market – and some handy parking features too.

On the go, that means adaptive cruise control, controlling distance to the vehicle in front – at speeds between “about” 30 and 100km/h – and coming to a complete stop in traffic as needed. A tap of the accelerator pedal or ProPilot button will see the car resume driving.

Steering can likewise be entrusted to the Leaf in emergency situations, with the car actively working to stay centred in its own lane.

ProPilot Park builds on that by taking total control of the parking process, from identifying a suitable space to managing all inputs – steering, acceleration and braking.

All of this is thanks to four high-resolution cameras and information from 12 ultrasonic sensors around the car.

Nissan has confirmed it is actively working to develop its ProPilot product into a fully rounded autonomous driving system, but, although not confirmed, buyers of the new Leaf are unlikely to see more and more new self-driving functions uploaded to their own car’s brain.

Web articles – via partners/network co-ordinators. This website and its contents are the exclusive property of ANGA Media Corporation . We appreciate your feedback and respond to every request. Please fill in the form or send us email to: [email protected]
Previous: Look Up: Sun Storm May Ramp Up Auroras Tonight!
Next: Researchers find second-fastest-spinning pulsar