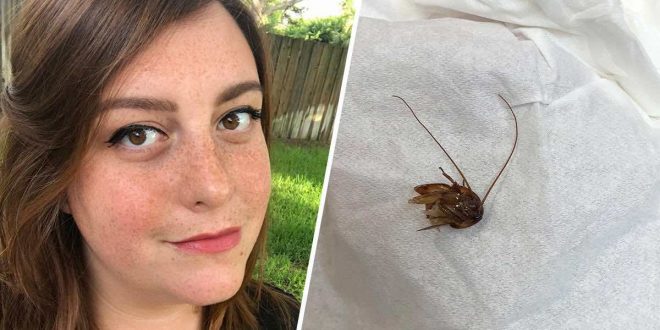 Katie Holley made a 2 a.m. emergency room visit after realizing that the pain in her ear that she described as “feeling like an ice chip” was actually a palmetto bug!

Holley said cockroaches had been a problem ever since she and her husband bought a house in Florida last year.

“Anyone who has lived in a humid location is probably well-acquainted with these flying, horrifying monsters,” she wrote. “I learned that they tend to take shelter in homes in hot or wet weather, although they can show up out of nowhere. Well, roaches kept making appearances in our home, so I finally called a local exterminator.”

The couple had their house sprayed for the insects several months back and thought they were free of the infestation. But then one night in March Holley woke up in the middle of the night when she felt something strange in her ear.

“It felt like someone had placed a chip of ice in my left earhole–but it was something way worse,” she wrote. “I shot up out of bed, disoriented, and stumbled to the bathroom. I could feel that my ear was not right. I grabbed a cotton swab and gently inserted it into my ear to see what was up and I felt something move. When I pulled the cotton swab out, there were two dark brown, skinny pieces stuck to the tip. Moments later, I came to the realization that they were legs. LEGS.”

As she began to panic, Holley’s husband grabbed a pair of tweezers and tried to pull the roach out, but he only managed to pull out two of its legs. The two decided they needed to get her to a hospital to have the bug removed.

“As I walked to the car, I could feel the roach trying to wiggle deeper into my ear canal,” Holley described. “It was an awful feeling, one that was not necessarily painful, but psychologically torturous. Think of that humming sound you hear when you plug your ears and press really hard — that’s what I heard and felt, on the left side of my head as the roach tried to crawl. It was bizarre.”

Once they arrived at the emergency room, a doctor had Holley lie down with her left ear (with the roach) up so he could work on removing it. She went on to describe the strangest part, which was the still-alive roach reacting to the doctor putting the numbing agent Lidocaine in her ear.

“Feeling a roach in the throes of death, lodged in a very sensitive part of your body, is unlike anything I can adequately explain,” she wrote.

The numbing agent killed the roach after about two minutes. Once it was extracted, Holley said it was about the size of the top two portions of her pinkie finger.

But the ordeal wasn’t quite over. About a week later she went back to the doctor’s office as her ear was still in pain. It turned out many pieces of the roach were still inside her ear canal, including the head.

“I couldn’t stop thinking about the fact that so much of the roach sat in my ear for over a week and the potential infection I could have developed,” she wrote. “I felt so lucky that my physician took the time to examine my ear again and spotted those stubborn pieces. Now I am roach-free and feeling better. I do think that my ear will heal faster than my psyche.”

Web articles – via partners/network co-ordinators. This website and its contents are the exclusive property of ANGA Media Corporation . We appreciate your feedback and respond to every request. Please fill in the form or send us email to: [email protected]
Previous: Man Attacked by Shark at Kukio Beach in Hawaii (Watch)
Next: US Teacher Appreciation Week: Five issues educators actually need