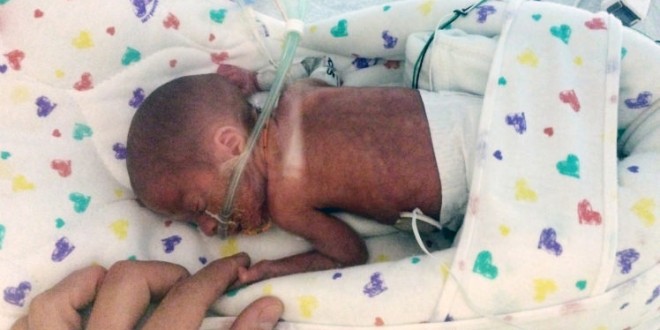 How a one-pound baby born at sea was kept alive? Emily Morgan from Utah said she wrapped towels around her baby son and with the help of medical staff, managed to keep him alive until the ship reached port in nearby Puerto Rico.

Morgan explained that doctors didn’t expect her son Haiden to live, but with a makeshift incubator and an early arrival in port, the baby is recovering.

Haiden is now receiving care at a neonatal intensive care unit in Miami.

Morgan said: ‘I knew the baby was coming.’

After the delivery, she said the doctors told her she had miscarried and she should get some rest, but she insisted on seeing the baby.

About 45 minutes later, medical staff said the baby had survived but wasn’t expected to live long.

She said: ‘I had felt him kicking. I felt the process of him getting bigger.
‘I said, “I’m going to see him, I don’t care if he’s alive or if he’s dead.”‘

They brought her to her newborn son, who was wrapped in towels wet from the birth. He was wearing a tiny oxygen mask on his face.

As the hours went on, she insisted he be wrapped in fresh, dry towels, and she helped staff tuck microwaved saline packets around him to create a makeshift incubator. They used a sanitary napkin to keep his head warm and tried to avoid touching his sensitive skin.

Meanwhile, the captain was speeding the boat to Puerto Rico, and it arrived about two hours early. It was none too soon – black spots were starting to appear on Haiden’s fingers, indicating his circulation was starting to fade.

Two ambulances rushed the family to a hospital, and they were transferred to a children’s hospital in Miami a few days later.

It’s not totally clear what caused Morgan to go into early labor, though doctors have said it might have been related to dehydration, an elevation change or the differing temperatures at sea.

Dr. Bradley Yoder, medical director of the newborn intensive care unit at the University of Utah said that a baby like Haiden born so early and so far from a hospital has a less-than-10 percent chance of survival.

Web articles – via partners/network co-ordinators. This website and its contents are the exclusive property of ANGA Media Corporation . We appreciate your feedback and respond to every request. Please fill in the form or send us email to: [email protected]
Previous: Dead pitbull found in N.E. Calgary dumpster, investigation launched
Next: Brain-wave system: Paralyzed man walks by brain power alone ‘Video’