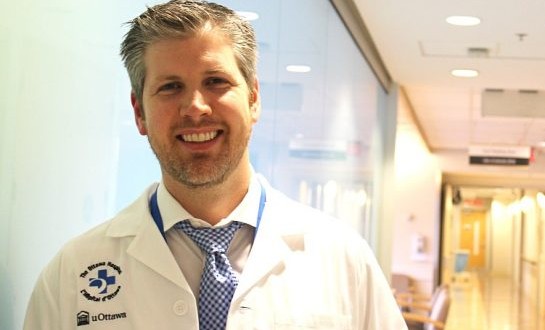 A new research shows more doctors are opting to leave prostate cancer untreated – but that’s not necessarily a bad thing, says a lead surgeon at The Ottawa Hospital.

About 24,000 Canadians are diagnosed with prostate cancer every year and approximately half of them have a slow-growing form of the disease.

This kind of surveillance for low risk prostate cancer has recently been recommended by Cancer Care Ontario. This paper, published in the Canadian Medical Association Journal, is the first comprehensive study to describe how often surveillance is being performed in Canada.

The research team reviewed the medical records of 477 men with low-grade prostate cancer referred to The Ottawa Hospital’s Ages Cancer Assessment Clinic between 2008 and 2013. They found that the number of patients under active surveillance increased dramatically from 32 percent in 2008 to 68 percent in 2013. They also found that after five years of follow-up, about 59% of the patients under active surveillance were still being managed that way.

“Recent data suggest that low-grade prostate cancer can grow very slowly, and therefore many patients likely don’t need treatment at all,” said Dr. Rodney Breau, senior author of the study and a prostate cancer surgeon and epidemiologist at The Ottawa Hospital and the University of Ottawa. “Some men can go for years, or maybe their entire lives, without the cancer spreading. If we monitor patients closely, we can still treat the cancer if it becomes higher risk. If the cancer doesn’t progress, they can avoid unnecessary surgery, radiation and other therapies, which can have side effects including incontinence, impotence and bowel problems.”

One man who was able to avoid this kind of unnecessary treatment is Stephen Wilson, a 56-year-old dairy plant manager in Winchester, Ontario. When he was diagnosed with low-grade prostate cancer in December 2012, both his oncologist in Cornwall and Dr. Breau recommended that he go on active surveillance.

“Whenever you hear the ‘c’ word, panic sets in,” said Wilson. “You have to live with the notion that it’s there, but I have a background in science which allowed me do that without any problems. Now it’s been three years and I’m good; active surveillance has been the right choice for me.”

Dr. Breau notes that the study confirms that being diagnosed with prostate cancer does not necessarily mean a man will need treatment. This means that doctors can maintain the benefits of prostate cancer screening while reducing a potential harm – the overtreatment of slow-growing tumours. In addition, the study found that among the patients who received treatment, almost all did so because of a change in their cancer, not because of anxiety.

“Many patients are now avoiding unnecessary treatment, and this represents a major paradigm shift in the management of this disease,” said lead author Dr. Octav Cristea, a urology resident at The Ottawa Hospital and the University of Ottawa. “With more studies like ours coming out, I hope that active surveillance will become the global standard for patients with low-grade prostate cancer.”

Web articles – via partners/network co-ordinators. This website and its contents are the exclusive property of ANGA Media Corporation . We appreciate your feedback and respond to every request. Please fill in the form or send us email to: [email protected]
Previous: Hubble captures star’s stunning blue bubble “Photo”
Next: Subway Goes With Antibiotic-Free Meat, Report