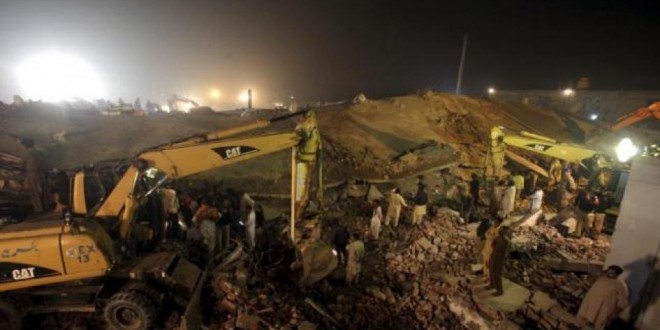 Pakistani rescuers have pulled more than 100 survivors from the rubble of a collapsed factory and are searching for dozens of others believed still trapped in a disaster that has killed at least 20.

The reasons for the collapse are unclear but reports suggest the factory’s owner, who was adding an extra floor, may had ignored advice to stop construction work after cracks in the walls following a powerful earthquake more than a week ago.

The quake of magnitude 7.5 killed more than 300 people in Pakistan and the northern parts of neighbouring Afghanistan and damaged thousands of buildings.

“We were working on the first floor when the roof collapsed,” said one of the trapped workers, Liaqat Ali, who used his mobile to talk to a television station.

“Now, I can hear the rumble of heavy machines which gives me hope that I will come out alive.”

Rescue officials have said 150 people were believed to have been in the building when it collapsed.

But search teams had to move slowly, government officials insisted, to avoid further injuries to those still trapped.

Many of those working at the plastic bag factory are said to have been children.

It is the latest tragedy to spotlight poor safety standards in south Asia.

Web articles – via partners/network co-ordinators. This website and its contents are the exclusive property of ANGA Media Corporation . We appreciate your feedback and respond to every request. Please fill in the form or send us email to: [email protected]
Previous: Online Therapy Eases New Doctor’s Suicidal Thoughts, new study says
Next: Deen Castronovo: “Ex-Journey drummer” opens up about domestic violence