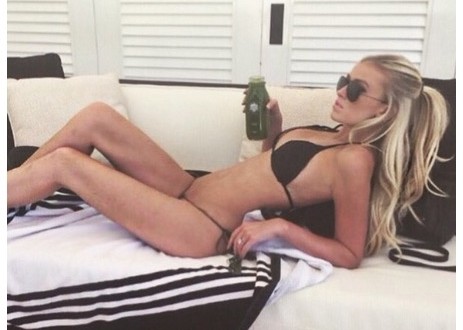 Paulina Gretzky, who gave birth to her son Tatum just five months ago, looks stunning in a bikini and shows no signs of having been pregnant.

The 26-year-old model and singer slipped into a black bikini to strike a sexy pose. “Lounging,” she captioned the sizzling picture.

It’s clear she’s got genetics on her side and probably a healthy diet by the looks of her green juice.

Whatever the case, she appears to be glowing in her new role as mommy.

“It’s hard to describe, but just from the first day he’s born, your perspective on life completely changes,” Gretzky told ABC in March. “Things that were important aren’t important anymore. He’s kind of the only thing that’s really important, and being there for him and being a role model for him.

Web articles – via partners/network co-ordinators. This website and its contents are the exclusive property of ANGA Media Corporation . We appreciate your feedback and respond to every request. Please fill in the form or send us email to: [email protected]
Previous: Robin Williams ‘Boulevard’ Trailer : Actor Goes Dramatic for One of His Final Roles ‘Video’
Next: Youth found guilty of 1st degree murder in death of YRP officer