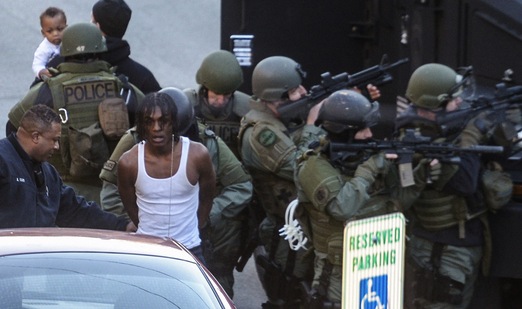 The teen accused of opening fire on a group of students leaving Brashear High School on Wednesday told a witness he wanted to go to the school to walk his friend home, court documents show.

Once he emerged from the woods near Crane Avenue and saw a large group of students, Anjohnito “A.J.” Willet, 16, told the witness, who Pittsburgh police did not identify, that he didn’t need to meet his friend anymore and now had a ride, according to the criminal complaint filed against Willet.

The witness told police he began walking back through the woods when he heard three gunshots, and turned to see Willet shooting toward Crane Avenue.

Police believe the shooting might stem from a drug-related fight between some students last month, Richard said. Neither she nor school district officials immediately provided more details.
Six people were brought in for questioning, Pittsburgh public safety director Michael Huss said about two hours after the shooting. Police said some were current or former students, but Richard wouldn’t say whether any were considered suspects or necessarily going to be charged.

“There are no arrests at this time, though we have some folks of interest,” Huss said.
“Our police need the time to do a thorough job here and we need to give them that time.”
Acting police Chief Regina McDonald confirmed, however, that police had stopped searching for gunmen, and Huss said, “The situation is under control.”

None of the victims immediately spoke or cooperated with police, Richard said.
All were listed in good to stable condition at city hospitals, she said. Two are 17 and one is 16.
The student who was shot in the head was found inside the school, though that’s because he “made his way back to the school, and was pulled back inside by one of the administrators,” Richard said.

She stressed, “There was no shooting at Brashear school. … The shooting did not happen in the school.”

Brashear, with about 1,400 students in grades nine through 12 about two miles south of downtown, was locked down briefly, though students were released to their parents about 90 minutes after the shooting.

According to a Safe Schools report filed annually with the state, Brashear had 97 incidents involving 138 people during the 2012-13 school year, but none resulted in a police response or arrests.

Forty-seven students were disciplined for fighting, the report said.

Web articles – via partners/network co-ordinators. This website and its contents are the exclusive property of ANGA Media Corporation . We appreciate your feedback and respond to every request. Please fill in the form or send us email to: [email protected]
Previous: NFL Week 11 picks : Percy Harvin Returning and The Fate of Arian Foster
Next: Elizabeth Berkley on Dancing with the Stars : Actress eliminated in upset