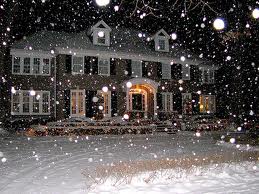 Miracle on 34th Street was turned into a Broadway musical named Here’ s Love in 1963.

… It’s been reported that the house Kris Kringle finds for Natalie Wood at the end of the movie is located at 24 Derby Road Port Washington, New York. If you happen to be driving by send us a picture.

The scenes in the movie at the Macy’s Thanksgiving Day parade were filmed at the real parade in 1946. Today the parade is still as popular as ever and there is a lively website for you to check out and if you are a marching band you can apply to march. Although there is a history of the parade there is no mention of its famous movie appearance.

… Finally we have to answer the question: Where do letters written to Santa Claus really go? Let us tell you about Operation Santa Claus. It began in the 1920’s when postal employees chipped in their own money to answer the wishes of children who sent letters to Santa. Today anyone can contact their post office to see if they are participating in the program and pick up a letter or two and make a child’s dream come true. Next Christmas we are going to watch Miracle on 34th Street and then we are going to head down to the post office and answer a Santa letter! You should too.

Web articles – via partners/network co-ordinators. This website and its contents are the exclusive property of ANGA Media Corporation . We appreciate your feedback and respond to every request. Please fill in the form or send us email to: [email protected]
Previous: Jen Arnold : TLC star will document cancer battle
Next: West Hills, California : 7211 Whitehall Lane, Sold for $1,070,000