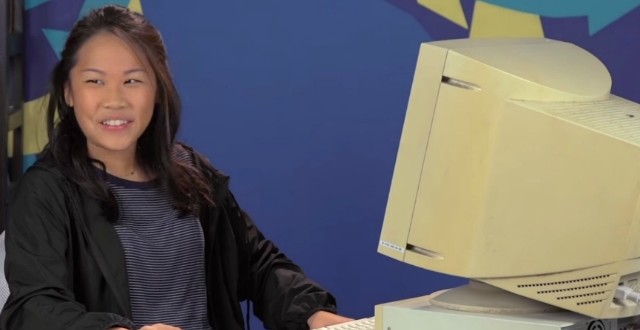 'It's prehistoric!' Teens react to Windows 95 and are utterly baffled (Video)

More than two decades ago, Microsoft introduced Windows 95, at the time considered a major leap forward in personal computing.

But now, it’s treated as nothing more than a prehistoric dinosaur.

Fine Brothers Entertainment got a bunch of teenagers and sat them in front of an “ancient” — one of them even calls it “prehistoric” — Dell desktop PC from the ’90s, and once they marveled at the outsized monitor and figured out how even to boot the thing up (hint: once upon a time the monitor had its own power button), they were asked to describe what they saw on the Microsoft Windows 95 desktop, and if it looked at all familiar to them.

A couple acknowledge that, perhaps sadly, Windows XP doesn’t look a whole lot different from this, and it’s clear that a few of them have probably never used a Windows machine at all. (And, as most Apple geeks of a certain age will tell you, Microsoft just stole the whole “look and feel” of the desktop from the Mac in the first place, but I digress.)

Then they’re told that this computer doesn’t have wi-fi, and they will need to find another way to get on the internet. “What’s a modem?”

Web articles – via partners/network co-ordinators. This website and its contents are the exclusive property of ANGA Media Corporation . We appreciate your feedback and respond to every request. Please fill in the form or send us email to: [email protected]
Previous: Federal environment minister Catherine McKenna to visit Kamloops this month
Next: Kim Kardashian Inspires Sharon Osbourne to Post Nude Selfie (Photo)