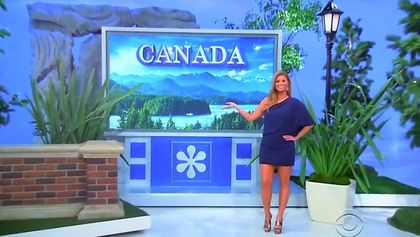 A lucky lady named Brenda won a round trip to Edmonton on the Price is Right Thursday.

Brenda Jo Phillipe, an EMS dispatcher in California, won a six-night stay at downtown Edmonton’s Fairmont Hotel Macdonald during an episode of the game show that aired Thursday on City TV.

When the prize was presented, an image appeared on the screen of a lake and mountains with the word “Canada,” which seemed to suggest that Edmonton was located in the Rocky Mountains.

“We’re going to send you to an amazing place, Brenda. It’s a vacation to Canada,” the announcer said.

Phillipe chose to take the middle number 9 out of the $75,919 Squeeze Play cost, making her guess $7,519 the correct amount of dough for the six-night stay in an executive suite at the Fairmont. She shrieked in excitement at the win, but later admitted that a stay at a city hotel was not really her thing.

Phillipe posted in the comment section of an online story that she opted to spend some money and head a few hours west.

Nothing personal, Edmonton, she claims.

“I declined the hotel, and opted to tour Banff, Jasper, and Lake Louise in a rented RV. Sure I have to pay for it (except the airfare), but traveling to beautiful places is something my husband and I love (sic),” she wrote.

Web articles – via partners/network co-ordinators. This website and its contents are the exclusive property of ANGA Media Corporation . We appreciate your feedback and respond to every request. Please fill in the form or send us email to: [email protected]
Previous: Woman Out-Muscles Man On Stadium ‘Flex Cam’ – Watch
Next: Rona Ambrose, canada’s health minister says dispensaries normalize marijuana use