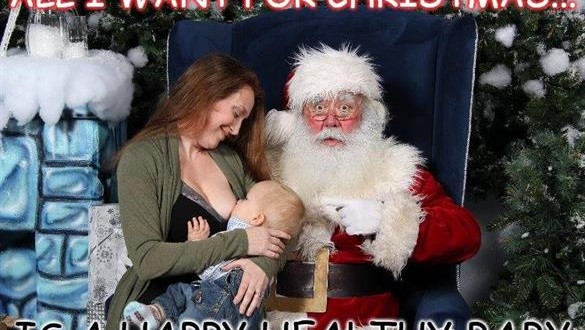 Rebecca Dunbar gets backlash for breastfeeding baby on Santa's lap

Rebecca Dunbar gets backlash for breastfeeding baby on Santa’s lap

An Ontario woman behind the viral photograph of herself breastfeeding her child while sitting on Santa’s lap says she’s disappointed with the public reception she’s received.

Rebecca Dunbar,40, a mom of 3 asked the Santa at Niagara Square to take a picture breastfeeding her one year old baby boy.

She said while luckily she never has been made to feel unwelcome when feeding her baby, she thinks it’s important that we continue to push the campaign to normalize breastfeeding.

She says while standing in line to see Santa last night her baby, her baby was getting a bit cranky and wanted to eat.

She said she stood in line feeding him, and made a joke that she should see if she could nurse while sitting on Santa’s lap.

She said she asked the photographer, and he was all for it, as was Santa.

She said the Santa said he had never had that request in the 40 years.

She said he loves the picture and wants it to be shared.

Web articles – via partners/network co-ordinators. This website and its contents are the exclusive property of ANGA Media Corporation . We appreciate your feedback and respond to every request. Please fill in the form or send us email to: [email protected]
Previous: South Edmonton armed robberies leave two Mac’s workers dead, Report
Next: Susana Martinez: New Mexico Gov Apologizes for Staff’s Conduct at Hotel Party (Video)