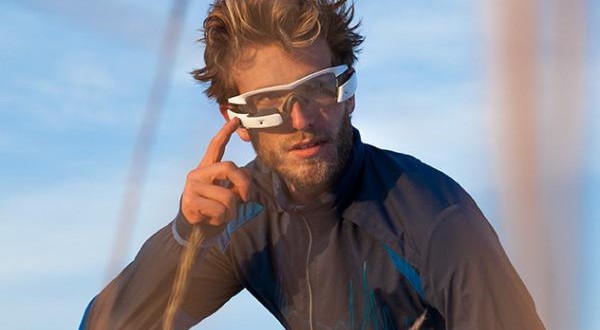 But the time has arrived – pre-orders of the glasses are shipping from today, 18 April, and they will be available to buy for $699 at specialist stores, Amazon.com and Recon’s own site too.

Tailored to cyclists and runners, both amateur and pro, the Recon Jet glasses can display speed, pace, distance, duration and more metrics in real-time thanks to on-board GPS and the ability to create a network of wearables to show stats such as cadence and heart rate too. The glasses can display texts and calls from your smartphone and there’s also a HD camera for POV stills and video.

Jet’s dashboard is customisable to the user and though Recon is targeting runners, cyclists and a few other sports, it’s a completely open platform. Apps are already in the works for recreational sailing, performance yacht racing, aviation and private aviation.

Stats are uploaded to Recon Engage apps for iPhone and Android as well as its web platform but they can also easily be shared to Strava, MapMyFitness, Training Peaks and more third party apps.

It’s a modular design so both lenses and batteries can be swapped out though it’s worth noting you can’t get prescription Jet glasses. The device is controlled via a touchpad and rocker which Recon says will work even with gloves and the (unspecified) display has a Glance Detection feature.

Available in black and white, we’ve got to say the black glasses with sunglasses’ lenses looks a lot less dorky than white with clear lenses.

As for specs, Jet uses a 9-axis sensor suite (including an accelerometer, altimeter and thermometer), has GPS on-board, a dual-core CPU, Bluetooth Smart, ANT+ and Wi-Fi so all your connectivity bases are pretty much covered.

“From the beginning, our design philosophy has been athlete-centric and activity-specific. We do not believe in generalist use cases for smart glasses. What really matters to the user when running or cycling? What will truly make a difference and add value to their experience? Every aspect of Jet’s design focuses on answering those questions.”

Web articles – via partners/network co-ordinators. This website and its contents are the exclusive property of ANGA Media Corporation . We appreciate your feedback and respond to every request. Please fill in the form or send us email to: [email protected]
Previous: Montana Gold Ghost Town : US Federal government searches for volunteers to work at abandoned gold mining outpost with a creepy past
Next: Ishpeming : Two Women Go Missing In Michigan On Trip To Upper Peninsula