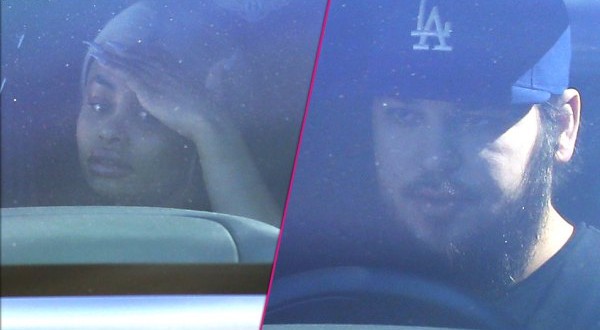 Rob Kardashian has a huge beard? Following a week of Rob Kardashian flaunting his new relationship with Blac Chyna, the lovebirds were spotted paying Kris a visit at her home in Hidden Hills. The momager allegedly called Rob and Blac for a meeting to discuss the elephant in the room.

Rob, 28, was behind the wheel while the 27-year-old sat in the passenger seat. The outing marks a rare public appearance for the reclusive Keeping Up with the Kardashians star.

Blac might not have much time on her hands in the upcoming months, though, as she’s going to have to clean up the mess she made by getting thrown in the slammer. In case you missed it, Tyga’s baby mama was on her way to a paid club appearance in England when she was hauled off the plane and arrested during a layover in Texas for being drunk and disorderly. Making matters worse, the former stripper had two ecstasy pills in her sunglass case that the cops discovered and subsequently charged her with, according to the police affidavit.

The Kardashian clan has every reason to be concerned about this new romance! Rob hasn’t exactly been in the most stable emotional state for the past several years, and now the family nemesis has him right where she wants him. He reportedly “adores” her, but she clearly just loves being back in the limelight. It’s kinda sad, actually!

Web articles – via partners/network co-ordinators. This website and its contents are the exclusive property of ANGA Media Corporation . We appreciate your feedback and respond to every request. Please fill in the form or send us email to: [email protected]
Previous: Nature Conservancy of Canada Celebrates World Wetlands Day
Next: Ontario adopts new PTSD strategy for first responders, Report