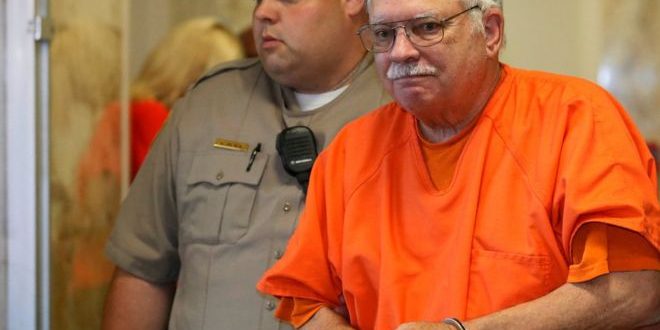 Robert Bates, a former Oklahoma reserve deputy convicted in the fatal shooting of an unarmed man being subdued by regular deputies last year was sentenced on Tuesday to four years in prison for second-degree manslaughter.

Robert Bates, 74, and his attorney, Clark Brewster, cited his public service and health issues as reasons to reduce his sentence.

But so did the son of Eric Harris, the man Bates shot to death during an undercover gun buy operation in north Tulsa in April of last year.

While Bates’ attorneys and supporters testified that his health is failing, and that a four-year sentence would effectively be a death sentence, Harris’ family talked about their loss.

Robert Bates was a 73-year-old with a long history of donating equipment and money to TCSO when the shooting occurred.

He was on the scene when the county’s Violent Crimes Task Force made an undercover buy of a gun and five rounds of ammunition in a grocery store parking lot in north Tulsa.

When the suspect, Eric Harris, tried to run from the scene, he was caught by deputies and there was a struggle.

TCSO says Robert Bates reached for his taser to help, but accidentally grabbed a gun instead.

He shot Harris once in the upper torso, a wound which proved fatal, though Harris was on the ground with at least two deputies holding him down.

In the subsequent investigation, KRMG uncovered documents which showed that Robert Bates used a gun he hadn’t trained with and wasn’t authorized to carry, and that records of his training as a deputy had been lost or falsified.

The ensuing scandal ended the decades-long career of former Sheriff Stanley Glanz, along with nearly the entire command staff of TCSO.

And while the sentencing closes another chapter of the saga, civil rights lawsuits and the criminal case against Glanz have yet to be resolved.

There are reportedly also open investigations into the incident, and the sheriff’s office, at both the state and federal levels.

Web articles – via partners/network co-ordinators. This website and its contents are the exclusive property of ANGA Media Corporation . We appreciate your feedback and respond to every request. Please fill in the form or send us email to: [email protected]
Previous: Cycling is even more popular in Quebec, says new study
Next: Sidney Crosby leads Pens into Stanley Cup Final